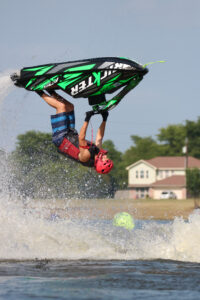 Hundreds of racers with an unprecedented 223 entries in multiple classes came together to crown the Champions at the final round of the Jettribe Texas Watercross Series.  The Lake Coleman venue was epic and reflected a jet ski stage with manicured landscaping provided by the city of Sulphur Springs.

Tents lined the shores and spectators came out in the hundreds to witness the Texas Championship showdown.  Seasoned promoter Nauti Water Racing and staff pulled together with Jettribe to provide the biggest race in Texas in over a decade.  Racing action was on display from the first moto until the final snap of the band on Sunday.

Junior Stars of Florida provided a tutorial session for all the junior racers, and Jettribe hosted the first annual Corporate Challenge that included many local Sulphur Springs businesses getting a taste of the action on the course.  The track layout provided a challenge to all racers with a split section on the left-hand side of the lake with full utilization of the lake space giving spectators a 360 viewpoint that aimed to please.

Junior Stars racers made great progress throughout the season with Javier Falcon, Tristen Heibert, Andrew Vo, and Hendrix Smith all taking home Championships in a variety of Junior Classes.  Jettribe Team Rider Rippin’ Ryan Poper missed one round of the series, but won everything he touched on the water at the final round. He put on a clinic himself by demonstrating his talents, setting himself on deck for another top spot at IJSBA World Finals.

Vintage 550 class is always stacked with talent and Ralph Henning maintained his points lead to win the overall Championship.  Doing it out front in Sport Spec we had Tim Miller and Kenny Compton going hard, but it was Bibi Barylski taking home the championship after putting together 3 solid rounds in the series.  All the 2021 Superjets in Texas showed up for the 4 Stroke Lites classes.

Pro Watercraft Racing sponsored rider Haigen Smith in Pro-Am, Joe Barylski in Amateur and Mike MIhills in Vet, and all hit the top spot on the podium to win championships in this new class for IJSBA this season.

Jettribe Rider Bridget Poper cleaned up in the Women’s Pro Ski Class and Jettribe Travel Team Member Wyland Reden flew in from Cali to scramble some championship points as he laid down the hot laps in every moto he raced, taking this round’s trophies back home on the plane.

Beginner Ski was a stacked class all series and the local boy Brian Snyder aboard his Kawi 1500 managed to put together success in each round for the overall Championship.  Impressive young Racer Cooper “C Note” Caldwell dominated the Rec Lites class making huge strides throughout the series, improving on every moto and picking up the checkered flag and overall championship for that class.

So much great racing kept announcer and racer Jeremy Styno-mite, on his toes with updates at every turn and straight away.  Overall it was a fantastic final round with all racers, staff, promoters, and sponsors looking forward to the next season.

Special thanks to our Course Marshalls led by Robert Crowe for an injury-free and safe series.  We will be back next year, bigger and better with more in store for the racers.

We could not do it without the support of our sponsors and our extreme gratitude goes out to Jettribe USA, Nauti Water Racing, Pro Watercraft Racing, Pro Rider Magazine, VP Racing Fuels, 321 Kawasaki and Austin Jetskier.  Thank you to all the racers, families, spectators and cities for making this a great comeback season for IJSBA World Championship qualifying in Texas.