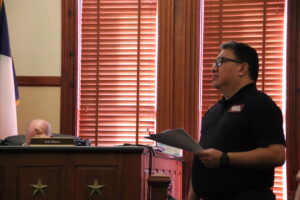 The Hopkins County Commissioners Court discussed lowering the county’s proposed tax rate, 4H, and construction projects, among other items of business at their regular Aug. 23 meeting.

The court opened at 9:03 a.m. The commissioners unanimously approved their consent agenda and previous meeting minutes.

Dike citizens presented themselves to discuss the proposed solar farm in their community [see related story] from 9:06 a.m. to 9:17 a.m., after which point the court closed the public forum with no further comments.

Hopkins County AgriLife extension agents Dr. Mario Villarino and Johanna Hicks appeared before the court to give their annual update regarding county 4H projects and progress.

According to Hicks and Villarino, activities and awards in 2020-2021 included (but were not limited to):

The county commissioners also expressed their interest to Hicks about forming a team in her annual Walk Across Texas physical activity program, in which a group logs their walking steps over eight weeks to achieve a cumulative 830 miles– the length of Texas. Hicks stated she could “get something started” for such a county government walking team.

“I always tell people we have the best extension agents in the state,” county judge Robert Newsom concluded.

The court opened a public hearing for the county’s proposed fiscal year 2022 budget at 9:33 a.m. As no citizens presented themselves for comment on the budget, the hearing was closed at 9:34.

The court unanimously approved the salary for elected officials, which must be voted on separately from the budget itself. Court auditor Shannah Aulsbrook noted to the court that the rate had been appropriately posted.

The court  then opened a public hearing for the county’s proposed fiscal year 2022 tax rate at 9:36 a.m., which according to county assessor-collector Debbie Pogue-Mitchell has been lowered 4 cents from the previous year. In 2020, the rate was set at .52, but in 2021 the county was proposing to set it at .58.

“This will actually cause the actual amount of tax to go down,” Pogue-Mitchell stated. “We will get an increase overall because property values and new revenue, but the tax rate will go down.”

“I can’t say your bill’s going to go down, but your rate will be lower,” she said.

“I think that’s going to help everyone,” Pct. I commissioner Mickey Barker said. Pogue-Mitchell said she agreed, and added that county debt had also decreased over the last year.

Hearing no public comment, the public hearing for the tax rate was closed at 9:38 a.m.

The court then unanimously adopted the proposed fiscal year 2022 tax rate, which was set at .58 cents per $100.

The county then discussed bids it had received for two two-ton pickup trucks for the Hopkins County Sheriff’s Office.

Chief deputy Tanner Crump thanked the county for considering bids, as he said he felt it was important  the Sheriff’s office could have vehicles dedicated to inmate transport as opposed to their current system of swapping out patrol vehicles.

The court unanimously approved the bid for Texas Country.

The court then reviewed a request for qualifications regarding two proposed county building projects: a county saferoom and trustie housing.

For the county safehouse, the county received bids from engineering firms DRG and GHC. A selection committee reviewed the qualifications of each, and found that DRG scored more highly on their selection criteria.

The court then unanimously resolved to reappoint all current sitting election judges for a further 2-year term appointment.

The court then approved a request to appoint a court stenographer for the 62nd judicial district, and will share the cost of the appointment with Delta, Lamar and Franklin Counties.

The court then approved a bid from Horne Brothers Construction in the amount of $66,766 to repair hail damage to the gutters and downspouts of the Hopkins County courthouse.

Aulsbrook noted the county was awaiting an insurance payout on the damage of $75,497, which would more than cover the cost of the repairs.

The court then unanimously approved the addition of Juneteenth, or Emancipation Day, as a county holiday.

The court then unanimously authorized a replat of a property at County Road 2334 from four lots into two larger lots.

Aulsbrook then requested court authorization to move funds gained from housing inmates to purchase the two trucks previously discussed for the Sheriff’s Office.

“I just want to put in the record that they [HCSO] has brought in $730,000 from housing federal inmates,” Aulsbrook noted. “He’s bringing in funds every month and I just want to say thank you.”

“We recognize that y’all work hard, and thanks to the Sheriff’s Office as a whole,” Newsom agreed.

The court then unanimously approved an interlocal agreement with the Ark-Tex Council of Governments for public safety equipment.

The court then unanimously approved an agreement with the State of Texas Attorney General’s Office for the State Case Registry.

With no further business, court was adjourned at 10:02 a.m.