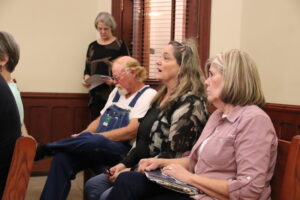 The Hopkins County Commissioners Court heard citizen feedback regarding the proposed Dike solar farm, among other items of business at their regular Aug. 23 meeting.

After opening the public comment forum at 9:06 a.m., the court heard from Dike citizen Michelle Barnes.

Barnes began by stating that she believed the proposed solar farm was not in the Dike community’s best interest.

“You know this is going to be detrimental to our community, but that almighty dollar spoke louder than comments from me or any other Dike voter,” Barnes stated.

Barnes stated that after discussing with the solar company, she learned that only 10%, or 185 acres of land will be used to plant pollinator-friendly vegetation. Barnes expressed concern that the remaining approximately 1700 acres of the proposed site would “have RoundUp applied to the ground to obstruct weeds and natural plant life.”

Barnes stated it was her belief that RoundUp leeches into groundwater and “due to the hilly nature of Dike, there will be nothing stopping RoundUp from flowing into our neighbors’ property.”

Barnes said she would “like to see the data on that.”

“I don’t know everything about the environmental situation, but I do know there is flooding on by the proposed solar plant,” Hamilton said. “I’ve lived there enough years to know what floods, and I know that area is no good for an industrial solar plant.”

Commissioner Bartley addressed the citizens, asking “why folks pick on the commissioners court.”

“They did the exact same thing we did, so do you share your concerns with them?” Bartley asked. Barnes said she did not, because “the commissioners court has more rule than they do.”

“If the school and hospital boards were interested, they would be up here also,” Barnes claimed. “They’re more like subsidiaries of what you guys do.”

Bartley stated the school and hospital boards were independent of the commissioners court, and Barnes disagreed.

With no additional comments, the public comment forum was closed at 9:17 a.m.