David Slaughter of Slaughter’s Barbecue Oasis denies he’s putting Sulphur Springs on the map for world-famous Texas BBQ. But the proof is in the (banana) pudding– after a coveted writeup in 2018 by Texas Monthly food writer Daniel Vaughn, Slaughter once again made headlines this summer with not one, but two sets of headlines in the Dallas Observer.

“It’s just all about the food,” Slaughter said. “I get away for a few days, but when I’m away, I’m still thinking about it.”

Slaughter’s passion can’t be contained, and it’s not just locals that are noticing. The 2018 Texas Monthly profile was a boon for business, and the Dallas Observer chose to include Slaughter in not just their summer 2021 BBQ road trip series in May, but also their summer retrospective which came out last week.

“You know at the moment when you recognize a food writer, we’re really living in that food world,” Slaughter said. “Everything we put out has to be ready, because they’re coming to eat and take pictures and they’ll blast it out to hundreds of people.”

Located at approximately 1000 Gilmer Street in the Fix n’ Feed parking lot, Slaughter’s BBQ Oasis doesn’t just have critics raving. Customers journey from all parts of Texas– and even from other states like Georgia and Pennsylvania– to experience Slaughter’s unique take, which he calls East Texas BBQ.

Slaughter, along with fellow BBQ artists Josh Hill and Lincoln Wyly, have been in their Gilmer Street location since 2017, and went full-time in the spring of 2019.

In addition to the traditional fare of brisket and ribs, they also range to the less-traditional sausage, turkey breast and chicken breast, and event to the trendy– a rotating, ever-changing menu of daily specials that ranges from nachos and breakfast sandwiches to queso and jalapeno poppers.

“This is by far the most stressful thing I’ve ever done in my life, but it’s the most rewarding,” Slaughter said. “You have to love it to do it, because you can’t be in the 118 degree weather in there with the smoker for the money.”

Slaughter attributes some of his recent recognition to a drive for perfection.

“If it’s not meticulous, if it’s not to our standards, it’s going in the garbage,” Slaughter said, in all seriousness. “Last week I threw away two whole briskets, 12-13 pounds, $300 in the trash because it wasn’t our product.”

“Every slice, every plate that comes out of our kitchen holds us accountable,” he said. “We can’t be having an off day.”

“Because if someone doesn’t like it, they’ll let everyone know,” Hill said.

With pursuit of excellence the number one goal, Slaughter and company couldn’t be more proud to represent East Texas. East Texas traditionally has sweeter sauces and more choice when it comes to fixins’ than central Texas BBQ, the crew noted. It’s a style they’re embracing.

“East Texas got a bad rap for barbecue, but now it’s really got some good places coming up,” he said. “Tyler, Longview, Hallsville, Gladewater, Greenville. Nowadays, it’s hard to not find good barbecue.”

And, said Slaughter, it’s a privilege to serve Hopkins County clientele, who are his number one staple.

“I wanted to innovate and run that daily special, because folks might not want to buy a rack of ribs everyday. But if they’re running by and see the queso looks good, they might want to stop in.”

While the accolades keep coming– two spots on WFAA including Trey’s Chow Down, two write ups in County Line Magazine, features in local media and garnering local cooking prizes such as the Back-to-School Burger Bash in 2019, Grill Boys in 2020, and the 5th annual Salute to Veterans cookoff in 2020, the crew say the most important thing is putting in the work for their city. 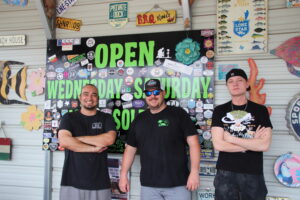 “The recognition is awesome, but at the end of the day what means everything is representing Sulphur Springs. We don’t take it for granted– everyday we still show up, because we want to be something that Sulphur Springs is proud to have.”