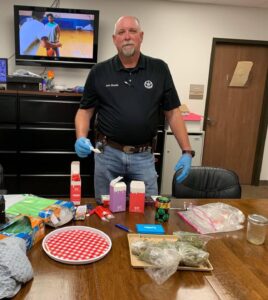 at approximately 8 p.m. this evening, according to the Hopkins County Sheriff’s Office.

As Beadle attempted to serve an eviction warrant at a presently unidentified address, he made contact with a male and initiated a pat-down search, a release by HCSO said.

During the pat down, Beadle allegedly located cocaine in the man’s pocket, HCSO said.

All four parties were booked into HCSO jail, although their names have not been released.