The Sulphur Springs city council met with city department heads to discuss the fiscal year. Of note were staffing challenges post-pandemic, purchasing new equipment, a plan to lower citywide taxes and seeing a payoff from investing in infrastructure.

Most department heads in the city noted they felt changes from the COVID-19 pandemic.

Ricketson said about COVID-19 cost-saving measures, “just like everyone else, we’re pretty thin.”

Related, council member Freddie Taylor noticed that both court costs and revenues were down. Finance director Lesa Smith informed him this was due to lower arrests and subsequent court processing fees collected during the pandemic.

Russ Nuss, who oversees Capital Construction, finds himself “shorthanded” and looking for construction and concrete workers in the post-pandemic employment landscape.

“Concrete is the hard one to find,” Nuss said. “They’re extremely difficult to find.”

Mayor John Sellers commented that he sees the concrete crew throughout the city on multiple different types of projects, most recently Martin Luther King Jr. St. and the Grays Building.

“Those guys are good,” Sellers noted. “They work hard.”

A presentation from Smith noted that to maintain the de minimis rate, the city should be lowering taxes in 2022 to .42 cents per $100.

Smith previously presented at the Aug. 3 initial budget session the tax rate for 2022 would stay the same as previous years at .44 cents per $100.

The city has neither raised nor lowered taxes since 2001.

“Let me understand this correctly, you are lowering the actual rate? We are lowering the tax rate that has been the same since 2001?” Sellers asked. Smith confirmed that the 2022 city budget would account for lowering taxes.

Although the city plans to lower taxes, because property values have increased, the city would actually take in an additional $450,000, Smith said.

“With all the values paid in, there’s such a large increase, so we lower our tax rate,” Smith noted.

“We always estimate our revenues conservatively and we spend our expenditures conservatively. We do that to avoid pushing it, because the cities that do that end up doing major layoffs,” city manager Marc Maxwell said. “Every year we contribute to the fund balance [savings].”

To this point, the city has approximately $4.4 million remaining in savings, or enough to run the city in its entirety for four months, Smith said.

“I think we do well for ourselves by budgeting conservatively, and I think it’s just a whole lot better way to do it,” council member Doug Moore said.

“I think that’s why we made it so well during COVID,” Sellers agreed. 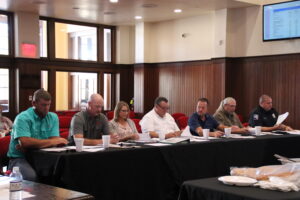 Fire, construction, parks and water departments requested new equipment, and the council engaged in a discussion regarding these requests.

The fire department is budgeted to purchase a new fire truck in 2022 for the cost of $550,000. Council member Jay Julian asked about the planned new vehicle’s make, model and how many miles it would accumulate.

“I’m pretty well counting on at least 8,000 miles a year,” city fire chief David James told Julian. “Miles are not as important as hours, though. When you’re sitting on-scene, hours are running wild, but the odometer’s not moving.”

The city has purchased three fire engines since 2006, according to council member Oscar Aguilar. The engine James is looking to purchase is a pre-owned refurbished 2003 Sutphen engine, he said.

“It’s time for a new engine,” James told Front Porch News. “They do well when it’s time for a new one and we’ve been fortunate. It’s a big investment, so we try to keep up with maintenance and take care of what we’re given.”

The construction division, under the direction of Nuss, is requesting a backhoe in fiscal year 2022.

The current tractor, which the department plans to retire, is a 2005 which “is starting to have repair issues” according to Nuss.

“As long as it’s not being used everyday, it’s okay,” Nuss said.

Still, he said, the crew would like to keep it on-site to use as a forklift for gravel and asphalt.

The parks department, under the direction of Jerry Maynard, is requesting a sub-compact tractor/ skidloader.

“It has multiple attachments. You can put a boom mower, a sickle mower, and you can cut around the lakes and even under the water,” Maynard told the council.

A benefit of the tractor Maynard had sourced, he said, was the dual-tire design that would allow it to mow the steep slopes of Coleman Lake. 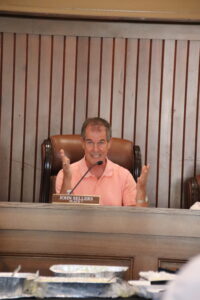 “You can put a snowplow on it for sidewalks or small areas… it’s unlimited what you can do,” Maynard said.

In that vein, Julian also inquired if the city was equipped to clear snow in the event of “another 100-year storm.” Nuss informed Julian the city had not one, but two spreaders.

“Hopefully we won’t need them, but if we do, we’ve got two,” Sellers laughed.

While the city budgeted a healthy $12.4 million in infrastructure repair and another $1.6 million in city improvements such as street repair and the Crosstown Trails project, Maxwell pointed out that the city was starting to reap the rewards of previous years’ investment into infrastructure. For example, utilities director James Jordan told the council in fiscal year 2021, his department fixed 13 total city water leaks. By contrast, Maxwell noted, “there was one year where we fixed 17 main breaks (water leaks) in one day.”

Council member Gary Spraggins, who lives near Houston where the leaks occurred, remembered the day.

“I could have sold tickets,” he reminisced. “The water was flowing sky-high.”

The takeaway, Maxwell told Front Porch News, is that investing city dollars in infrastructure is worthwhile.

“What we’ve been doing is working,” Maxwell said. “We started off with a water system that was leaking like a sieve. We’ve gradually ramped up our effort to replace all the water. The fact that we now have a fraction of the water main ruptures that we used to have means that it’s working.”

Julian agreed, and said he thinks it’s important to ask the tough questions.

“We council members are everyday citizens and it gives us a chance to dive into the nuts and bolts of the budget,” Julian said. “I appreciate the opportunity to address the department heads as representatives of the citizens. We ask them questions and get direct answers, and that’s how we see to the accountability of the funds.”

“As long as we keep it 100% and work together, this city is in good shape,” Aguilar concluded. 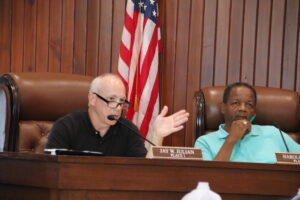