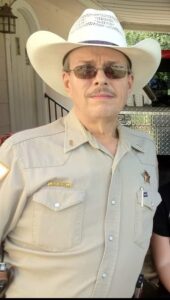 On Friday, August 6, 2021, Gary Wayne Moon, loving brother, and father of four children, passed away at the age of 60. Gary was born on October 29, 1960, in Ladonia, TX to Betty and Dudley Moon. He was the first of three children, survived by his brother and sister, Jimmy Moon and Teresa Palmer. He graduated high school to follow in his father’s footsteps and became a carpenter.

Along with being a skilled builder and artist, Gary spent 9 years as a volunteer fireman at the Sulphur Springs Fire Department, and then, in 1988, he became a founding member of the Hopkins County Sheriff’s Posse.

Gary would go on to rise through the ranks in the Hopkins County Sheriff’s Posse for a total of 33 years of service. Gary was a phenomenal builder and artist. He helped build many houses with his father, Dudley Moon, and became an artist for the local newspaper early in life.

Gary is survived by his siblings and his four children, Cody Moon, Kasie Moon, Chris Moon, and Logan Wilcox, two grandchildren, Alayna and Amelia Moon, as well as his special friend, Vicki Nugent. Gary Moon was dearly loved by many, known for his incredible talents, dedication to his community, his kindness and compassion, and friendly personality to all.

Funeral services will be held at 2:00 pm Sunday August 15, 2021, at The First Baptist Church of Sulphur Springs with Fred Lewis and Tommy Johnston officiating. Interment will follow at Pleasant Grove North Cemetery with The Members of the Sheriff’s Posse and Color Guard serving as pallbearers. Honorary pallbearers will be Garland Hatley, Scott Shahl, Sergio Reyes, John Vance, and David Anderson and Tex Maynard posthumously.