Forage grasses for different regions of Texas by Mario Villarino

Cool-season annual forage grasses are well adapted to most regions of Texas with soil texture generally the most important factor in adaptability of each species.

Regardless of species, it is important cool season annual forage grasses be established under a fairly narrow set of conditions to ensure maximum success potential.

Where moisture is generally not limited, such as in East Texas, cool-season annual forages may be successfully sod-seeded into warm season perennial grass swards. This practice is used to increase forage nutritive value, extend the grazing season, and reduce winter feeding costs.

A soil sample should be obtained well before the time to establish the cool season pasture. Adequate P and K should be present and soil pH should be 5.5 or higher. If planting into a clean-tilled seedbed, necessary P, K, and especially limestone should be incorporated into the soil ahead of planting.

Phosphorous can also be applied at planting in the seed furrow as 18-46-0. If overseeding into a warm-season grass sod, P, K, and limestone can be surface-applied with good results.

Nitrogen is generally second only to moisture as a limiting factor to plant production. On heavy textured soils and where available, N fertilizer may be applied as anhydrous ammonia pre-plant in clean-tilled seedbeds.

Typically, however, N is applied as a dry form of inorganic N fertilizer, such as ammonium nitrate or urea and either incorporated into the seedbed during preparation, or as a top-dress at various times during the forage growth cycles.

Liquid formulations of N, such as 32-0-0, may also be used to top-dress forages. Nitrogen application rates will vary with region of the state. In East Texas, 100 to 200 lbs of actual N per acre may be required for small grain-ryegrass combinations. As fields are planted further west in the state, less N is applied due to reduced moisture availability.

Planting for fall pasture should be made as early as possible to allow maximum forage production prior to winter dormancy, but this is a region specific.

In Central and Northeast Texas, for example, late-summer plantings on prepared seedbed (i.e., late August, early September) can capitalize on the bimodal precipitation pattern to provide pasture for grazing by late October or early November.

If sod-seeding, then a mid-October time frame would be more desirable to capitalize on the somewhat reduced growth rate of the warm-season perennial grass. If planting in South Texas, the timing could very well be later in the year.

Seeding rate and planting depth can be critical elements in stand establishment. Small grains are generally seeded at 90 to 100 lbs PLS/acre. Tall varieties of wheat can be planted as deep as two to three inches in late August and produce good stands.

This aspect can be important for later summer plantings when producers attempt to plant to soil moisture. Semi-dwarf wheat, on the other hand, suffers from poor emergence if planted greater than one inch due to a much shorter coleoptile (a protective sheath covering the emerging shoot) length.

Rye should not be planted any deeper than three-fourths inch. Ryegrass is generally not drilled, as are the small grains, but simply broadcast at a rate of 30 lbs PLS/acre over a field generally as part of a fertilizer application. 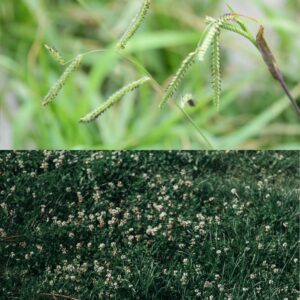 For more information, see Forage Establishment Fundamentals, SCSC-2015-05 and Annual Winter Pastures for East Texas, SCSC-2006-05. Legumes may be used in much of the eastern one-third of the state where moisture is not limiting as a means of extending grazing season length, increasing the nutritional plane of grazing livestock, and/or reducing the amount of N fertilizer required in a pasture program.

Several forage legumes are widely adapted to, and used in Texas. Most species make good hay and are relished by both cattle and white tailed deer.

However, baling legume hay requires much experience. If baled too dry, there is much leaf shatter loss and baled too moist results in fungal growth and additional potential problems.

For more information on this or any other agricultural topic please contact the Hopkins County Extension Office at 903-885-3443 or email me at m-villarino@tamu.edu