The Northeast Texas Rural Rail District (NETEX) announced it has a timeline to begin a transload facility in Sulphur Springs, and resolved to give its operator Freedom Rail more time to bring the tracks up to Class 2 standards, among other items of business at the board’s regular August meeting.

The Sulphur Springs Hopkins County Economic Development Corporation’s Roger Feagley appeared before the board to provide updates on the planned rail transload facility in Sulphur Springs.

According to Feagley, requests for proposals have been sent out, and hope to have bids returned by September 1.

“The specifications are written, we’ve got the design down, and we’ve got all the different permits we had to get,” Feagley said.

Feagley said the group hopes to start construction by the end of 2021. Feagley also reported there seems to be a good market price for rail supplies.

Freedom Rail’s Mike Salek appeared before the board to request changes in the agreement between the two parties regarding track class standards. Specifically, Salek asked that NETEX target Class 2 standards only.

“We had two years to get to Class 1 and then another three years beyond that to get to Class 2,” said NETEX board president and Titus County representative Brian Lee. “Discussion has been, why should we make Class 1 adjustments and changes just to reach that two-year deadline?”

“Let’s put the emphasis all on Class 2 quality from the get-go,” Brian Lee emphasized.

According Salek, agreements between the two parties would provide for the tracks to be upgraded by June 30, 2027.

The need for an updated timeline, according to Salek, is the amount of vegetation overgrowing the tracks, which he estimated had not been maintained for ten years.

Overgrown vegetation is a fire hazard and an accident hazard Salek noted. Ironically, he said, since the railroad is seeing more traffic, the risk for an accident is rising. Freedom Rail noted 700 carloads for August 2021, versus 200 carloads at this time last year.

NETEX discussed sharing costs of $4500 per month over five years with Freedom Rail to aid in clearing vegetation. Treasurer Neal Barker pointed out that net income from car traffic by Freedom Rail is $4506. In the words of Delta County representative Mark Baird, “it’s pretty much a wash.”

“We want to get this fixed up and bring in new customers,” Brian Lee said. “This is a two-way deal, and we’re together in this.”

Salek stated delivery of brush-clearing equipment would take approximately 90 days, and it would take up to two years to “make the tracks proper.”

The board unanimously approved the previous month’s meeting minutes.

No citizens presented themselves for public comment, and no board members declared conflict of interest.

The board unanimously approved the monthly treasurer’s report, which indicated NETEX has $238,315 in their operating account and $51,613 in a money market account.

The NETEX board heard a report from operator Freedom Rail that the group had replaced 239 ties, fixed three bridges in Hopkins County, and seen no derailments. 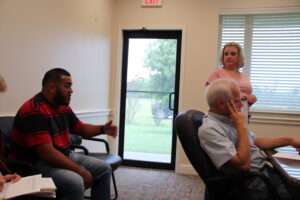 Freedom Rail’s Miguel and Amanda Fernandez update the NETEX board

The board unanimously authorized RAMS management and auditing system to renegotiate a water lease with a private landowner.