Cuellar and Graham’s letter is the latest in a series of criticisms against the Biden administration’s border security response. 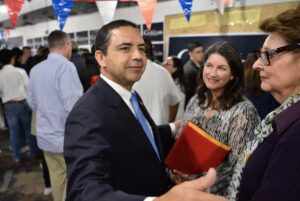 U.S. Rep. Henry Cuellar, a Democrat from Laredo, penned a letter alongside Republican U.S. Sen. Lindsey Graham of South Carolina, raising concerns about the growing number of migrants crossing the country’s southern border, and calling for the White House and the Department of Homeland Security to appoint a new border czar.

The letter, which Graham tweeted Friday morning, named former DHS Secretary Jeh Johnson or someone with similar credentials as an ideal candidate for the position.

Cuellar and Graham lauded Johnson for his “exceptional bipartisan reputation for pragmatic approaches to complex border security and immigration challenges” and asked the letter’s recipients to consider creating a “special executive position” within DHS, which a spokesperson for Cuellar said was simply a plea to fill the vacancy left by Roberta S. Jacobson in April.

Jacobson stepped down from the position amid the Biden administration’s struggle to address an increase in undocumented migrants coming from Central America. That role has since been taken up by Vice President Kamala Harris — who drew criticism for her now infamous “do not come” comment made during a trip to Guatemala in June.

Cuellar and Graham’s letter is the latest in a series of criticisms against the Biden administration’s border security response.

The two cited the spread of the delta variant at the country’s southern border as the reason behind their plea.

Johnson served during former U.S. President Barack Obama’s second term. Graham and Cuellar praised him for coordinating “a thoughtful U.S. response to a migration influx event and prioritizing certain eligible cases for immediate removal” in 2014, referring to an effort from Johnson to expand the detention of migrant families coming from Central America after migrations surged that year.

Johnson was met with criticism from immigrant rights activists for the move, which the border-town Democrat believes only makes him more certain that Johnson is best suited for the role.

“That’s exactly the point — I think this administration is listening only to the immigration activists,” Cuellar told the Texas Tribune.

“I want somebody like Secretary Jeh Johnson, which in my opinion was a very compassionate person. But he followed the law. I mean, he did what needed to be done,” Cuellar went on to add.

The White House and Department of Homeland Security did not respond to requests for comment.

The letter comes after Texas Gov. Greg Abbott ordered state troopers last week to begin pulling over vehicles suspected of transporting migrants with COVID-19. The move has been criticized by advocates who say the order will create chaos for shelters that assist migrants, some of which have already hit full capacity.

They also see it as an invitation for border officials to racially profile people in border communities.

By Farah Elothamy of the Texas Tribune