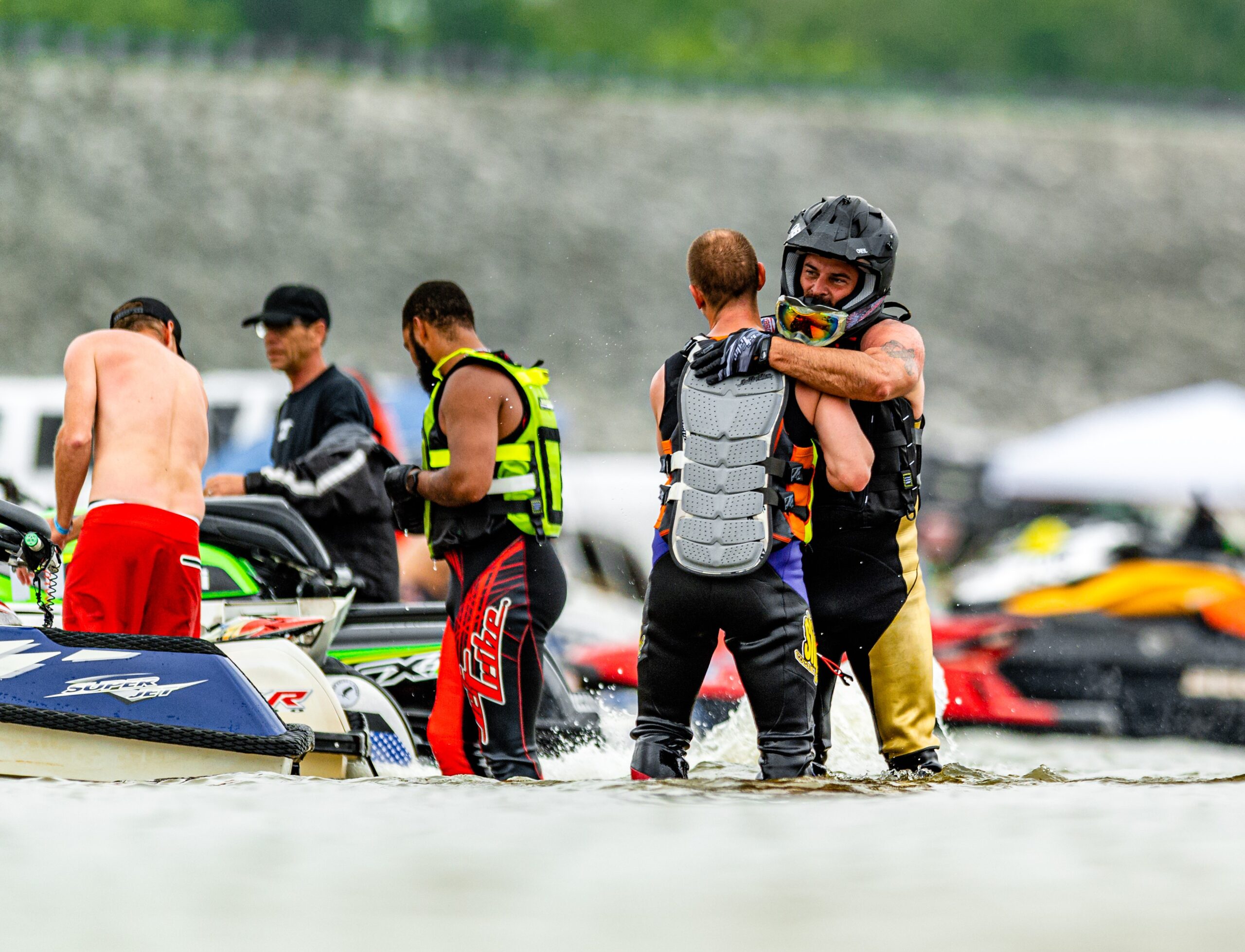 July 3rd weekend local Sulphur Springs and Jettribe “Race Family” riders Andrew Vo and Brian Snyder traveled to Llano, Texas for Round 2 of the Jettribe Texas IJSBA WaterX Championship. It was an awesome scenic drive from Sulphur Springs. Much thanks and gratitude to the City of Llano for once again hosting the jet ski race at their annual “Rock’N River Fest” event. Riders from the surrounding states attended this family 4th of July weekend and competed amongst a stacked line-up of professional riders to build points for the upcoming Jettribe Texas IJSBA State Championship in Sulphur Springs July 24th and 25th.

The City of Llano rolled out the red carpet for the incoming racers with banners and billboards. The local government support was beyond what was expected. The race site was situated in a park alongside the Llano river. There was awesome live music and local food vendors to entice all taste buds. Each night ended with an amazing fireworks show.

Your local Sulphur Springs’ racers Andrew Vo and Brian Snyder “a favorite for the win” came into the second round of the Jettribe Texas Championship on cloud nine from their first place overall podium finish at last month’s race in Somerville, TX. However, with power sport racing anything can happen…

Brian Synder, a former Californian, competed on his 2020 Kawasaki 1500cc SXR stand-up ski with some newly modified motor work and enhanced handling components. Andrew Vo, who also recently relocated to Texas from California, raced his new 2021 Yamaha 1050cc Superjet for the first time. Due to some electrical gremlins, Andrew’s ski would not fire up until the day before the race. Hats off to Tim Miller, a Pro Racer who owns Deplorable, Power Sport out of Waco, for his determination that Andrew would race on his own ski Saturday morning! Tim worked tirelessly and methodically on the electrical issue and miraculously Andrew’s ski roared to life that night!

Saturday morning was race day and crowds were gathering, the National Anthem played, and racers went to the mandatory riders’ briefing. Following the meeting all junior racers attended a racer’s clinic for race safety and sportsmanship. Jettribe expressed their gratitude to the “Junior Stars” instructors who came in from Florida to make this happen for the junior racers. Jet ski racing is a dangerous sport, and the kids were fortunate to have the best gear and training. instructions. Just imagine a 65lb junior rider on a 450lb 1050cc stand-up jet ski that puts out 100hp stock out of the box!

After lunch and the crowd-pleasing Jet Ski Freestyle show, the race officially started. Throughout the race site you could hear and feel the familiar sound of crackling race ski engines, the smell of the two stroke premix VP race fumes, and the low rumbling of the powerful 4 strokes motors with turbos. Announcers called each race class to the line (about 24 individual race classes in all) with various age groups and all kinds of race skis and experience levels.

Andrew Vo normally races the beginner junior class in the 10 – 12-year-old group, since this is only his second race. Unbeknownst to his parents and Andrew, he was mistakenly entered in the older and advanced group of Juniors Lites 4 strokes skis. The Jettribe team was too nervous and focused on the starting line, and the fact that Andrew had not had any practice time on his new ski, to notice all of the racers were an age group older and more experienced. The next thing they knew all riders were lined up at the starting line, the starting band snapped, the gate opened and all skis jets were down the straight away!

To the team’s amazement, as the pack of junior racers cornered their first left turn buoy, Andrew was able to narrowly grab the coveted “hole shot” from the pack of hungry riders. Andrew was able to fight off the pack for about 2 laps until Hendrix Smith (Andrew’s friend and teammate) swept past Andrew on the back straights. Andrew held on to a solid second place as he cornered the last buoy for the “hallelujah” checkered flag. However, in a heartbreaking moment, Andrew fell and his ski got away from him just short of the finish line. Jettribe’s respect and gratitude go to the safety course marshals for quickly fishing Andrew from the water and using a yellow caution flag as the rest of the riders headed towards the finish line.

Brian Synder (a favor for the podium) continues to be a Cinderella story as lightning did strike twice! He raced his stand-up ski in a stacked line-up of riders and achieved a clean sweep all weekend. On his 1500cc Kawasaki SXR he rocketed first out of the starting gate, kept his lead, and fought off passing riders with his huge wake. Brian took first overall for Llano Round 2, as well as first place and overall points from Round 1 of the WaterX Series in Somerville.

​Stay tuned as the last and final round of the Jettribe Texas WaterX Championship will take place right here for the first time in Sulphur Springs July 24th and 25th. Head out to the north shore of Lake Coleman and cheer on your home grown jet ski racers! The overall point winners at this event will be crowned IJSBA Texas State Champions!