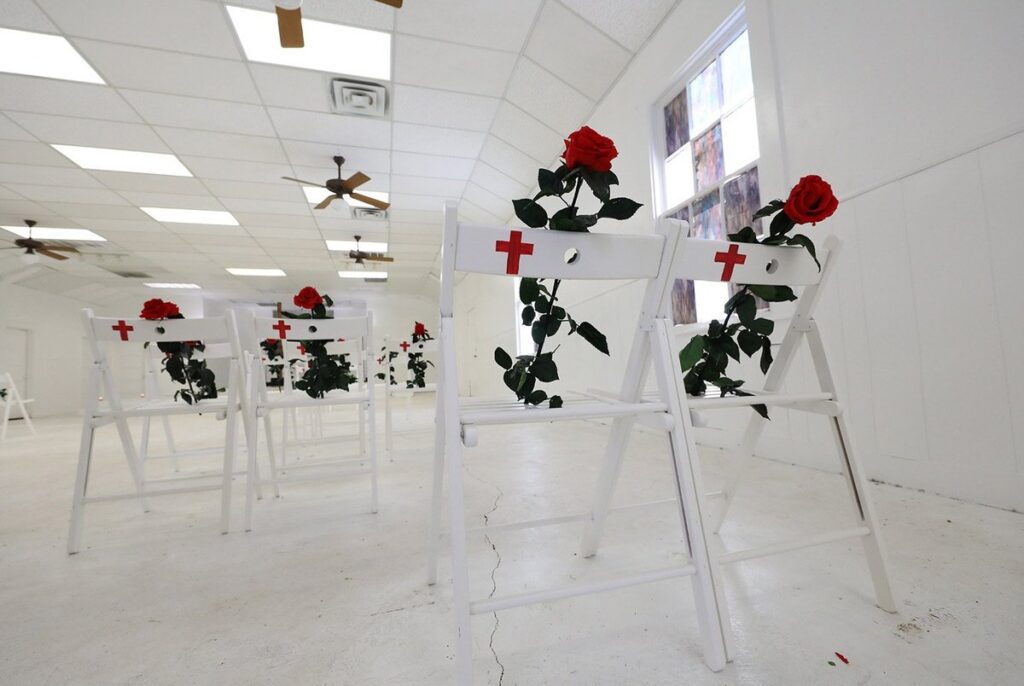 The man who gunned down 26 people at a Sutherland Springs church in Texas’ deadliest ever mass shooting should not have been able to buy the assault style weapon he used, but the store that sold it to him can’t be sued because a federal database failed to flag his past assault conviction, the Texas Supreme Court ruled Friday.

In a unanimous ruling, the state’s highest civil court threw out multiple lawsuits against Academy Sports + Outdoors brought by survivors and families of victims of the 2017 mass shooting.

In four lawsuits, filed in Bexar County, victims and family members accused the retailer of negligence for selling a Model 8500 Ruger AR-556, fitted with a 30-round magazine, from its San Antonio store to Devin Kelley, 26, a former airman who served a year in confinement following an assault conviction in 2012. He was released from the U.S. Air Force in 2014 with a bad conduct discharge. Kelley lived in Comal County, about 50 miles outside of San Antonio.

Kelley opened fire during Sunday morning services at the First Baptist Church of Sutherland Springs, killing 25 people, including a pregnant woman, and injuring 20 others. According to The Associated Press, he died from a self-inflicted gunshot.

His motive was not completely clear, however, authorities have said the shooting may have sprung from a domestic dispute, and that his mother-in-law was a member of First Baptist Church.

In response to the suits, Academy claimed it was shielded by the federal Protection of Lawful Commerce in Arms Act, signed into law in 2005, which protects firearms dealers and manufacturers from lawsuits when a third party commits a crime using a legally purchased weapon.

Academy had asked State District Judge Karen H. Pozza to throw out the lawsuits, but Pozza ruled against the company.

In its ruling signed by Justice Debra Lehrmann, the high court granted the retailer a rare writ of mandamus and directed the trial court to grant the company’s summary judgment motion.

“Although federal law disqualified Kelley from purchasing a firearm at the time of the sale — based in part on his conviction in a 2012 court-martial for assaulting his wife and stepson and his dishonorable discharge from the United States Air Force — that disqualifying information was not in the system, which authorized Academy to ‘Proceed’ with the sale,” the court found.

Lawyers representing Academy said in a statement that the court made a “landmark” decision.

“Our thoughts and prayers continue for the victims of this tragedy,” the lawyers said. “We feel the entire Supreme Court opinion applied the law carefully and thoughtfully in this situation.”

There are nine other cases against Academy arising from the shooting that are pending, according to the state court’s opinion. A separate lawsuit has been brought against the U.S. government in federal court accusing the U.S. Air Force of “failing to collect, handle and report the required information,” according to court records. A ruling has not yet been issued in the case.

Days after the shooting, Republican U.S. Sen. John Cornyn spoke on the U.S. Senate floor mentioning the need for legislation to strengthen the National Instant Criminal Background Check System. He went on to introduce the “Fix NICS” act, which later was signed into law and requires government agencies to create plans for record submissions and penalizes agencies that do not comply.

Stanley Bernstein, one of the lawyers representing plaintiffs in the case, said as a group the plaintiffs were “disappointed” in the court’s decision.

“There were two chances to stop Kelley: Academy failed the first time. The federal government failed the second,” Bernstein said.

He also criticized how the court came to its decision, saying its argument was contrary to what federal officials testified in federal court concerning the legality of the sale of the weapon.

The Sutherland Springs shooting, along with a string of other mass shootings that occurred after it, spurred heated partisan debates over legislative measures needed to address gun control and safety. More than a year after the shooting, in 2019, the Texas legislature passed legislation that made it permissible for licensed gun owners to carry handguns in places of worship. However, places of worship are allowed to prohibit visitors from carrying handguns on the premises as long as they provide oral or written notice.