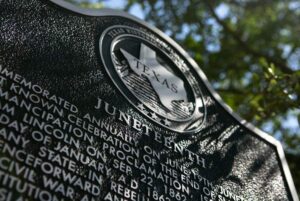 “This is a special day that originated in Texas and we’re proud to honor it,” Sharp said.

President Biden signed the Juneteenth National Independence Day Act today, establishing June 19 as a national holiday. In recognition of the historic nature of this event, the 11 universities and eight state agencies in the Texas A&M System will observe this holiday Friday.

Juneteenth commemorates the end of slavery. On June 19, 1865 Maj. Gen. Gordan Granger arrived in Galveston and delivered General Order No. 3, which announced that all slaves were free in accordance with the Emancipation Proclamation. Months later, the 13th Amendment was ratified, abolishing slavery.

Given the short notice, employees should report to work if they provide essential services or whose services are needed Friday to support events and activities involving or serving members of the public. They will be provided compensatory time off.