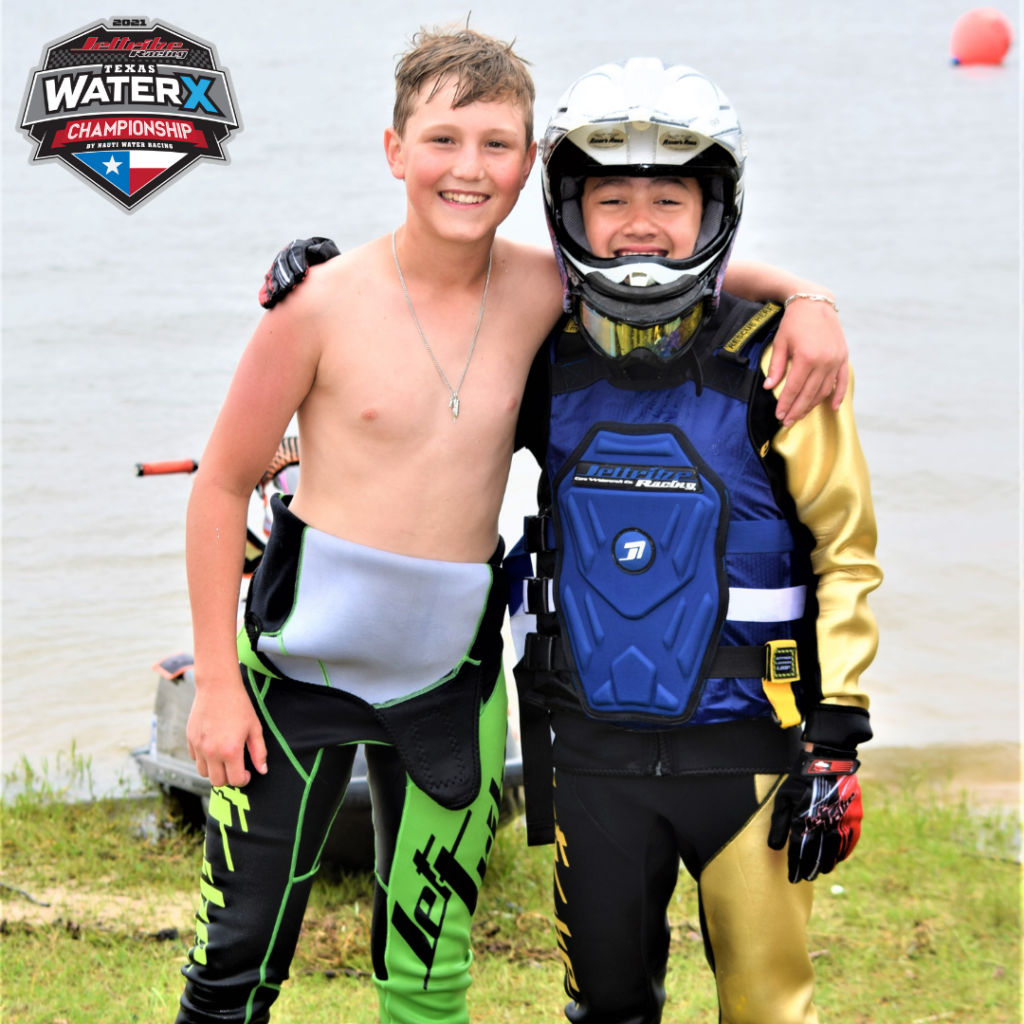 This past weekend was the kick-off event for the inaugural Jettribe Texas WaterX Championship. The professional jet ski race series is sanctioned by the IJSBA, a world-wide governing body that regulates watercraft racing laws and rules. Round One took place at Welch Park in Somerville, Texas. The series will continue July 3-4 in Llano, Texas, and the final championship will be in Sulphur Springs July 24-25, 2021. Race information can be found at www.jettribe.com/jettribe-waterx/.

Both Andrew and Brian had a tough weekend battling a full lineup of national jet ski racers, and they rode through some of the worst weather conditions. There was some choppy water and some bumps and bruises, but over 70 riders competed in 21 classes during the 2-day race.

It was especially challenging for Andrew entering this first race without any practice or conditioning since last season. To top it off, he rode a borrowed ski that he had never ridden before. Jettribe expresses their gratitude to the race organizer “Nauti Water Racing” and the mostly volunteer staff for working closely with all the junior riders to navigate the race course safely prior to the event.

Jettribe gives the biggest and warmest shout out to Larry Spector, a blast from the past Pro Jet Ski racer from Garland, TX that took Andrew under his wing to mentor him. Larry generously offered Andrew his personal 2021 Yamaha Superjet, a stand-up ski with over 1,000cc. He spent all day Friday training and coaching Andrew for Saturday and Sunday’s race.

There were many emotional up and down struggles to witness throughout the weekend. Both Andrew and Brian are first-time racers. They fought through the toughest weather conditions and a stacked racer lineup. It was a close 4 motos, during which Andrew and Brian both fell or “went swimming” multiple times. All hopes were lost for standing on the podium, but miraculously the fear, nervousness, and race jitters were tossed aside. In the last moto Andrew pulled off the much needed hole shot and fought to maintain his lead, earning first place for Junior Skis Stand-up 4 Stroke. Many thanks to race organizers Terry Heibert and Justin Smith for all of your support.

Brian Snyder’s case was quite a Cinderella story. In two consecutive motos Brian crashed and fell after the first turn. With his determination he recovered and rode his heart out. Eventually he wore down the pack of racers and capitalized on their misfortunes to pass multiple downed riders. He narrowly squeezed past the leading rider just one buoy before the checkered flag. The Jettribe team was speechless and thrilled by Brian’s win in the Beginner Stand-Up Ski class.

In the past 25 years Jettribe has participated in thousands of races both domestic and overseas. Never before has the staff seen such comradery between both friends and riders. They feel this is something that can only be found here in Texas, their new home.

Word up to Larry Spector’s race team who adopted and took care of Andrew and Brian as part of their own. There are lots of moving parts when racing power sports such as the pit crew, fueling, mechanics, launching and staging the race skis. Larry’s team made it seamless, and all Andrew and Brian had to do was put on a helmet and ride. Best of all through the ups and downs, the cheers and encouragement from the team never stopped, it only grew louder as each rider pulled up to the pit despite if the rider crashed or barely finished the race.

Jettribe is truly grateful to call Sulphur Springs Texas theirr new home. Andrew, Brian, Tony and others often practice at Sulphur Springs Lake on Friday’s after work. If anyone wants to experience the world of professional stand-up jet skis, stop by and join them!

Jettribe always instills in their junior riders like Andrew that the jetski racing sport is a privilege that has to be earned. Life is never easy, but hard work, ethics, resilience, and determination will pay off.”