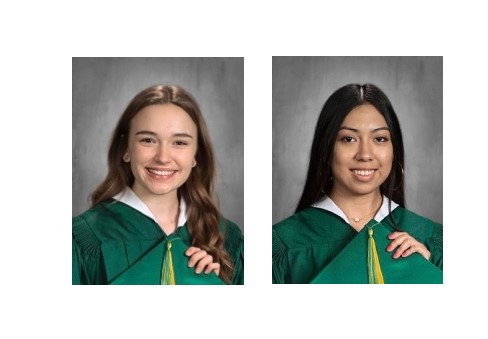 Jorja Bessonett has been named the Valedictorian of the Miller Grove graduating class of 2021 with an overall GPA of 102.06.

Jorja is the daughter of Bill and Cherrie Bessonett and the granddaughter of Glen and Carolyn George and Susie and Mike Bessonett. She has an older sister, Aleigh, and two younger siblings, Titus and Ava.

Throughout her four years of high school, Jorja participated in basketball, track, and cross country. In cross country and track combined, she won four individual and one team State Championship, and currently holds the 1A state meet record in the 3200. In addition to being an accomplished athlete, Jorja was involved in many academic activities: she was an active member of National Honor Society, Students Against Destructive Decisions, Miller Grove 4-H Club, and participated in Academic UIL.

Some of her favorite things to do in her free time include spending time with her family and friends, baking, and drawing. Jorja graduated in December 2020 with her Associate Degree in Multidisciplinary Studies from Paris Junior College where she was a member of Phi Theta Kappa. She plans to continue her education at Texas A&M University-Commerce in pursuit of a degree in Kinesiology and Sports Studies.

After this, she wishes to receive certification as a Medical Diagnostic Sonographer and obtain a job that she loves. Above all this, Jorja hopes to live a life of service to her Lord and show the love of Christ through her daily actions.

Andrea Resendiz has been named Salutatorian of the Miller Grove graduating class of 2021. She captured this honor with a GPA of 99.76.

Andrea is the daughter of Fred and Elizabeth Resendiz. She has four sisters, all who have graduated from Miller Grove ISD. During the beginning of her high school career, Andrea was a member of the FFA Chapter, serving as a Reporter her freshman year. She participated in state Forestry competitions and other career and leadership development events such as Creed Speaking. In addition, Andrea was a member of the National Honor Society, acting as Treasurer of the Miller Grove ISD chapter. Andrea was an active member of UIL, participating in math and language arts competitions.

Andrea was also a member of the athletics program, acting as a volleyball manager her sophomore year. As a dual-credit student, she earned her Associate Degree in Sociology at Paris Junior College. She was also a Phi Theta Kappa member through PJC. Andrea will be attending Grand Canyon University in Arizona this Fall on an academic scholarship, majoring in Justice Studies.