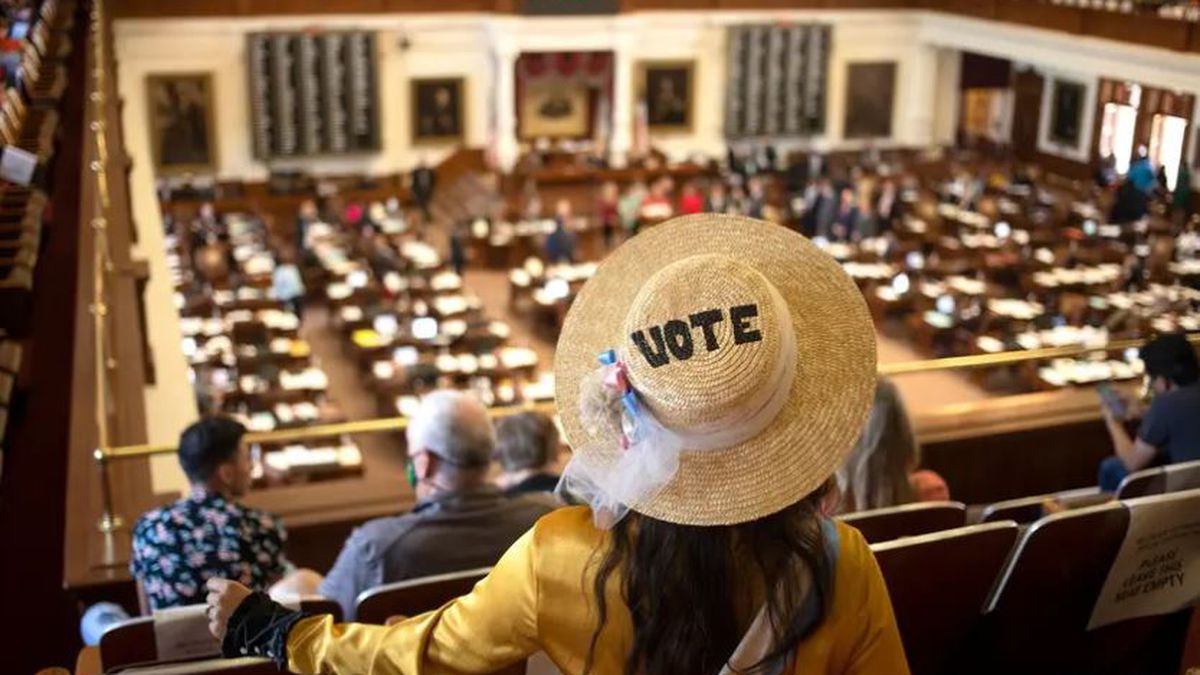 A member of the House gallery listens to legislators speak during a debate on an abortion bill being considered on the House floor on May 5, 2021.

Texas lawmakers are poised to enact sweeping restrictions on access to abortions, prohibiting the procedure before many women know they are pregnant, and opening the door for a potential flood of lawsuits against abortion providers.

The House on Thursday approved a priority “heartbeat” bill passed by the Senate earlier this spring, which was authored or sponsored by nearly every Republican senator and more than 60 members of the House. The upper chamber will need to review changes the House made to the legislation before it’s sent to the governor, who is expected to sign it into law.

Abortion rights advocates say the legislation is among the most “extreme” measures nationwide and does not exempt people pregnant because of rape or incest. Beyond the limitations on abortion access, the bill would let nearly anyone — including people with no connection to the doctor or the woman — sue abortion providers, and those who help others get an abortion in violation of the proposed law. People who support abortion funds and clinics could also be hit with lawsuits, and lawyers warn those sued would not be able to recover some of the money they spent on their legal defense.

The “unprecedented,” “extraordinary,” and exceptionally broad” language in the bills means “family members, clergy, domestic violence and rape crisis counselors, or referring physicians could be subject to tens of thousands of dollars in liability to total strangers,” nearly 400 Texas lawyers told House lawmakers in an open letter circulated by abortion rights advocates.

In a separate letter, more than 200 physicians said the bill would place doctors “at risk of frivolous lawsuits” and create a “chilling effect” where providers are reticent to give information “out of fear of being sued.”

The language in the bill is broad enough to open doctors from all specialties — like pediatrics and emergency medicine — up to lawsuits, the letter said, adding that “as licensed physicians in Texas, we implore you to not weaponize the judicial branch against us to make a political point.”

The bill, Senate Bill 8, bans abortions after a fetal heartbeat can be detected without specifying a specific timeframe, but a legislative analysis and its proponents have said that can be as early as six weeks.

She said her mother was given a “dim prognosis of an abnormally developing baby” but carried the pregnancy to term — “and now 44 years and two days later, that little baby girl is standing in this chamber, her heart beating as strongly and as rapidly as it did all those years ago.”

“As she lays out before you, Senate Bill 8, the Texas Heartbeat Act,” Slawson added, to applause from other lawmakers.

But debate over the bill quickly became contentious, and Slawson did not directly answer a variety of questions from Democratic lawmakers, including about broader health topics like if access to contraception had anything to do with the rate of unintended pregnancies, or if women could become pregnant while menstruating.

State Rep. Donna Howard, D-Austin, told Slawson that what she referred to as the sound of a heartbeat around six weeks is actually “electrically induced flickering” of fetal tissue, according to medical experts. At that stage of development, she said there is no developed heart.

“I don’t know that I agree with that,” Slawson said.

“Well, that’s what the science says,” said Howard, who grew emotional as the debate escalated and said later that the abortion debate is the “worst day of the session every single session.”

“You guys know that there have always been abortions and there always will be despite the obstructions that you’re putting in place here. Despite the self-righteousness of valuing life over what I value, which I highly resent. I also value the lives of the women and families who have to make these decisions,” she said.

An amendment from Slawson carved out a class of people who cannot file lawsuits under the bill: Those who impregnated a woman through rape or incest. She also changed the proposed law to limit lawsuits to only perceived violations of the bill and not any breach of state abortion rules. Both amendments will need to be accepted by the Senate before the bill goes to Abbott.

The legislation passed with 81 votes in favor and 63 against. State Rep. Ryan Guillen, D-Rio Grande City, was the lone Democrat to vote for it, according to an unofficial tally. State Rep. Alex Dominguez, D-Brownsville, was present but did not vote.

Most abortions in Texas are currently prohibited after about 20 weeks. Pill-induced abortions are barred at 10 weeks, in accordance with federal guidelines. The abortion provider must perform a sonogram on the woman 24 hours before the abortion and give them information about medical risks, abortion alternatives and assistance available to those who follow through with their pregnancy.

More than 56,600 abortions were performed on Texas residents in 2019, according to state statistics, most of them in the first trimester.

The bill’s passage comes as conservative state houses across the country have tried to curtail abortion access, emboldened in part by the new conservative makeup of the Supreme Court.

States including Texas are now trying to ban abortions at various stages of pregnancy or for different reasons — and with a goal of teeing up challenges before the Supreme Court, Heather Shumaker, director of state abortion access at the National Women’s Law Center, said earlier this year.

While “heartbeat” bills passed by other state houses have been blocked by the courts, Texas lawmakers believe legal language in their version makes it stronger.

But the provisions are controversial, and the lawyers who sent the letter to House lawmakers said they “contravene the Texas Constitution and undermine long standing rules and tenets of our civil legal system.”

Abortion providers and others could be sued later for conduct that was legal at the time — an “ex post facto liability” that “violates the very bedrock of our legal system which requires notice and due process before imposing liability,” the letter said.

Earlier Wednesday, abortion rights advocates hosted a morning press conference in protest of the measures, which they said would ban abortions before many women know they are pregnant.

“To the surprise of many — particularly my male colleagues here in the Legislature — women’s bodies are not clocks,” Howard said at the press conference outside the Capitol. “Periods are oftentimes irregular for many women. So unless you’re very deliberately trying to become pregnant, you’re likely not even considering at four weeks pregnancy — six weeks gestation — that you may be pregnant.”

Former state Sen. Wendy Davis, who gained national attention for filibustering abortion legislation in 2013, said the bill would disproportionately hurt those who can’t afford to leave Texas to get an abortion.

Texas Right to Life, an anti-abortion organization, celebrated the passage of the measure saying it was the “strongest pro-life bill to ever reach the Texas House floor.”

“This is a historic day for the state of Texas. The House has taken bold and wise action to protect innocent preborn children in the womb,” Rebecca Parma, a senior legislative associate with the organization said in a statement.

House lawmakers also gave approval to legislation that would amount to a near complete ban on abortions if the Supreme Court overturned Roe v. Wade or otherwise altered abortion laws.

“Instead of trusting women to know their own circumstances, their families and their own values, this bill makes the government the final arbiter of individual and intimate morality,” said Rep. Erin Zwiener, D-Driftwood. “Is trusting women really that unthinkable?”