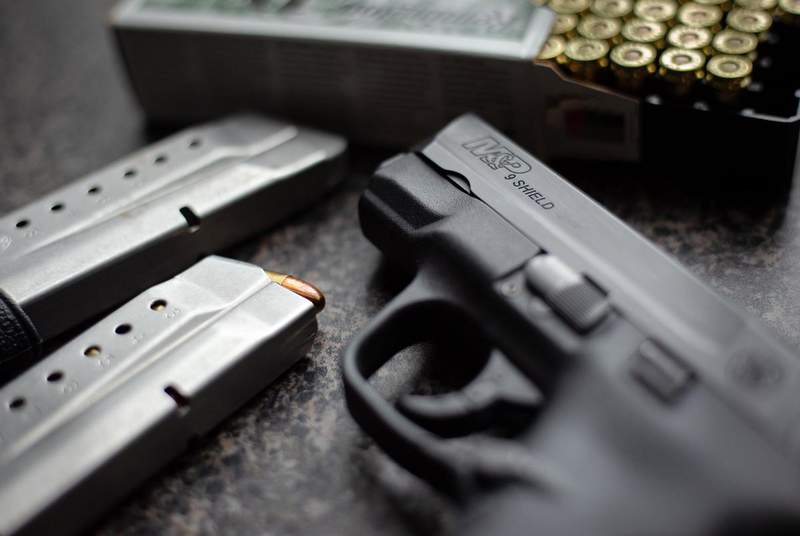 A Texas bill that would allow people to carry handguns without a permit quickly sailed Thursday out of a state Senate committee recently created to specifically tackle the legislation.

The move marks a significant step for the controversial proposal that for years struggled to gain momentum in either chamber of the Texas Legislature. But it remains to be seen whether the measure — already passed by the Texas House — has enough support to make it out of the Senate and to the desk of Gov. Greg Abbott.

The proposal would nix the requirement for Texas residents to obtain a license to carry handguns if they’re not prohibited by state or federal law from possessing a gun. Texans would also no longer be required to receive training before carrying a handgun in public.

Texans under current state law must generally be licensed to carry handguns, either openly or concealed. Some law enforcement officers, concealed carry license instructors and Democrats have voiced opposition to the legislation, citing safety concerns.

The Senate Special Committee on Constitutional Issues voted 5-2 along party lines to advance the measure to the Senate floor Thursday. The Texas House gave its approval to House Bill 1927 earlier this month, marking a win for gun rights activists who have for years pushed the measure at the Legislature. But the lower chamber’s approval was also a blow to some Democrats who have been fighting for gun safety measures since the 2019 massacre in El Paso.

“We cannot allow another session to come and go where we pay lip service to the Second Amendment, while failing to fully restore and protect the God given rights to our citizens,” said state Sen. Charles Schwertner, R-Georgetown, the bill’s sponsor in the Senate.

Lt. Gov. Dan Patrick, who leads the Senate, created the special committee last week and stacked it with supporters of the permitless carry proposal. Schwertner, a strong proponent of gun rights, was tapped to chair the committee. Patrick said Thursday he is “optimistic” about the legislation’s chances of passing even though he is still rounding up the necessary votes.

“We’re gonna come out with a strong bill, and I’ll believe we’ll pass it because we brought people together,” Patrick told conservative radio host Dana Loesch on Thursday afternoon. “And hopefully it’ll be on the governor’s desk soon, and we’ll get it signed.”

Before even taking up the bill or hearing from the more than 170 people who signed up to testify, Schwertner opened the hearing by declaring his intent to advance the measure out of committee on Thursday and to the Senate floor next week.

“We’re moving with all deliberate speed on this bill now because now more than ever Texans want to make sure that their Second Amendment rights are not only protected, but restored,” Schwertner said.

Schwertner discussed — but didn’t attach — six amendments that he said would make the proposal more palatable to law enforcement. The changes would:

The committee did not adopt the amendments before voting out the bill, but Schwertner said he was making them known to get discussion going ahead of debate on the Senate floor.

Ray Hunt, executive director of the Houston Police Officers’ Union, said his organization is taking a “cautious neutral” position on the bill and will wait to see which amendments are adopted. The current permitting process works, he said, and without significant changes to the proposal, the union is a “hard no.”

“If this bill is blocked on the Senate floor, there’s not one police officer that’s going to be screaming and hollering that’s been up here today,” Hunt said.

But not all in law enforcement who testified before the committee were opposed to permitless carry. Smith County Sheriff Larry Smith urged senators to “do your due diligence to pass this bill.”

Tara Mica, regional lobbyist for the National Rifle Association, testified that crime rates sank in other states after similar proposals were signed into law. But a growing body of research suggests the opposite. A 2017 study in the American Journal of Public Health concluded that permitless carry laws “are associated with significantly higher rates of total, firearm-related, and handgun-related homicide.” Researchers in the Journal of Empirical Legal Studies in 2019 found that permitless carry laws are linked to “13–15% higher aggregate violent crime rates 10 years after adoption.”

“We are now pretty much taking away all the safety precautions in terms of who can own and have a [handgun] out in public,” said state Sen. Juan “Chuy” Hinojosa, D-McAllen.

“While the legislation doesn’t make a mandate, the Legislature has an expectation of the citizen that exercises his right to be self-disciplined, to be self-governing in how they carry that weapon,” Birdwell said.

Gun rights advocates in Texas have for years rallied support for permitless carry. Supporters argue Texans have a guaranteed right under the Second Amendment to carry handguns, calling it “constitutional carry.” In backing the proposal, State Sen. Bob Hall, R-Edgewood, compared license to carry fees to poll taxes, a racist Jim Crow era tactic that required people to pay a fee before they could vote and was intended to prevent people of color from casting ballots.

“We don’t make people anymore pay a fee to vote,” Hall said. “But we have one now, which does discriminate against the financially less fortunate.”

Abbott on Tuesday said he would sign the permitless carry bill into law. As recently as last week, the governor had declined to say whether he supported such a proposal.

“I support it, and I believe it should reach my desk, and we should have ‘constitutional carry’ in Texas,” Abbott told North Texas radio host Rick Roberts.

Separately, the Texas House on Thursday afternoon gave initial approval to a measure that seeks to follow through on Abbott’s pledge to make Texas a “Second Amendment sanctuary state.” House Bill 2262 would prohibit state officials from enforcing future federal gun laws that are more restrictive than those on the books in Texas.