George W. Bush on Capitol insurrection: “I was sick to my stomach” 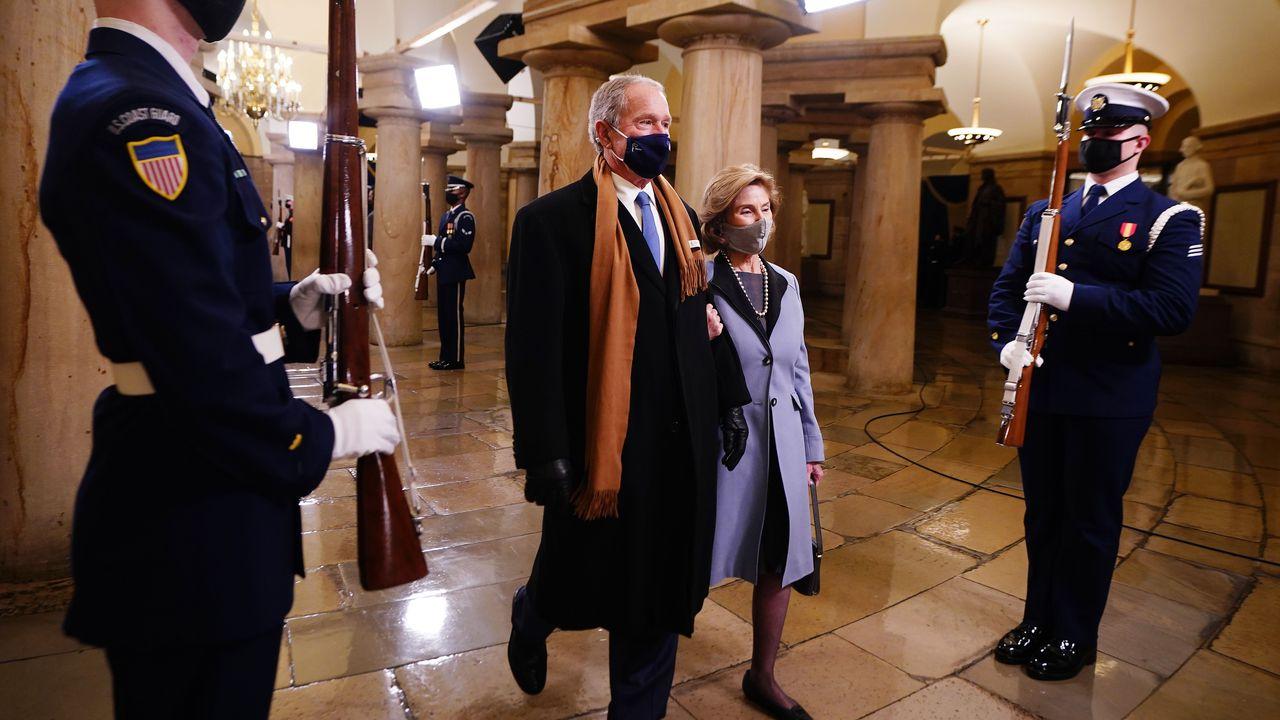 “I can’t remember what I was doing, but … I was sick to my stomach … to see our nation’s Capitol being stormed by hostile forces,” he told Texas Tribune CEO Evan Smith. “And it really disturbed me to the point where I did put out a statement, and I’m still disturbed when I think about it.”

“It undermines rule of law and the ability to express yourself in peaceful ways in the public square,” he added. “This was an expression that was not peaceful.”

The interview in partnership with The Texas Tribune was part of this year’s SXSW Online 2021 festival and kicked off Bush’s promotional tour of his new book, “Out of Many, One: Portraits of America’s Immigrants.” In the wide-ranging discussion, which was recorded Feb. 24 and streamed online Thursday, Bush commented on the current state of politics and continued his advocacy for an overhaul of the country’s immigration system. (Video of the interview is not available for replay.)

Back in November, Bush issued a congratulatory statement on the day television networks declared Biden the election’s winner, but in this interview he explicitly said the 2020 presidential election was not stolen.

“I think the election, all elections have some kind of improprieties,” he told Smith. “I think … the results of this election, though, were confirmed when Joe Biden got inaugurated as president.”

When pressed to answer directly over whether the election was stolen, Bush simply answered, “No.”

Even so, the former president said that while he is concerned about the scale of anger toward the government, he took heart in the high voter turnout rates in the 2018 and 2020 elections.

“It shows the vibrancy of democracy,” he said. “That’s a telltale sign that people want to get engaged in the system and that they were willing to go vote.”

“Look, politics has always been rough … And right now we’re at a period of time, though, when there’s a lot of anger in the system, which then causes people to worry about the future of our democracy,” he said. “I think it’s going to eventually work its way out of the system.

“History and the United States has shown these populist movements begin to fritter over time, and so I’m optimistic about democracy.”

Asked if the Trump-led federal government put democracy at risk in the aftermath of the 2020 election, Bush had another one-word answer: “No.”

“What’s putting democracy at risk is the capacity to get on the internet to spread … all kinds of stuff,” he said. “But checks and balances work. It’s a, you know, a balanced system. The courts work. The legislative process needs a little work, particularly on immigration reform … No, I thought the system worked fine.”

In the interview and in his new book, Bush continued his advocacy of an immigration overhaul. His attempt to change the system in the second term of his presidency was one of his greatest domestic disappointments, but one on which he spent a great deal of his political capital.

He said he deliberately postponed the book’s release to avoid injecting immigration into the fall election season.

“If I’d have been a more of a selfish guy, I would have tried to get the book out before Christmas of last year in order to enhance sales,” he said. “But I wanted to avoid the election season because one of the problems is immigration has become overly politicized, and it’s really a rebuke of Congress’ inability to come together to get something done on immigration.”

Bush, who took up painting in his retirement, painted portraits of immigrants and included written profiles of each one. The 43 subjects include former California Gov. Arnold Schwarzenegger, former Secretaries of State Madeleine Albright and Henry Kissinger, retired Dallas Mavericks star Dirk Nowitzki, Gilbert Tuhabonye, who leads an Austin-based running club, and Bush family housekeeper Paula Rendón, whom Bush considered to be “a second mother.”

The book will be released on April 20, and a companion exhibit of Bush’s portraits will debut on the same day at the George W. Bush Presidential Center in Dallas. The book’s thesis argues that American immigrants make a positive difference in the communities where they live.

“The immigrant stories in America often are about somebody’s come, makes enormous sacrifices so their families can realize the blessings of this country,” he said.

It is a message that is often at odds with his party’s rhetoric since former President Trump took control of the GOP. Bush said he’s “deeply concerned with the rhetoric around immigration” and stressed that Texas and American economies are reliant on a labor force that includes a strong immigrant component.

Bush acknowledged the disappointment of not accomplishing an overhaul that included a pathway to citizenship, but called it “a political pipe dream” to try to send so many people back to their original countries.

“Rather than ignore the situation, we’ve got to address it, and I do believe there should be a path to citizenship,” he said. “[But] I think Congress is going to have to be mindful that those who are undocumented don’t get to jump ahead of the line of those who are documented and have played by the rules.”

“It’s very hard, but that’s not to say one shouldn’t try.”

Bush said he has spoken with Biden and is so far pleased with his first two months in office.

“He’s an experienced guy, and you know, I had a good conversation with him,” Bush said. “I said, ‘Anything I can do to help, if I feel comfortable with it, let me know.'”

“He’s off to a good start it looks like,” Bush added. “Hopefully, this anger will work its way out of the system.”

As for advice for the new president, Bush encouraged Biden to tune out criticism.

“There’ll be a lot of critics, and just do what you think is right. And you shouldn’t tailor policy based upon the internet noise or the editorials. He ought to surround himself with a good team, listen to them and make decisions in a crisp way.”