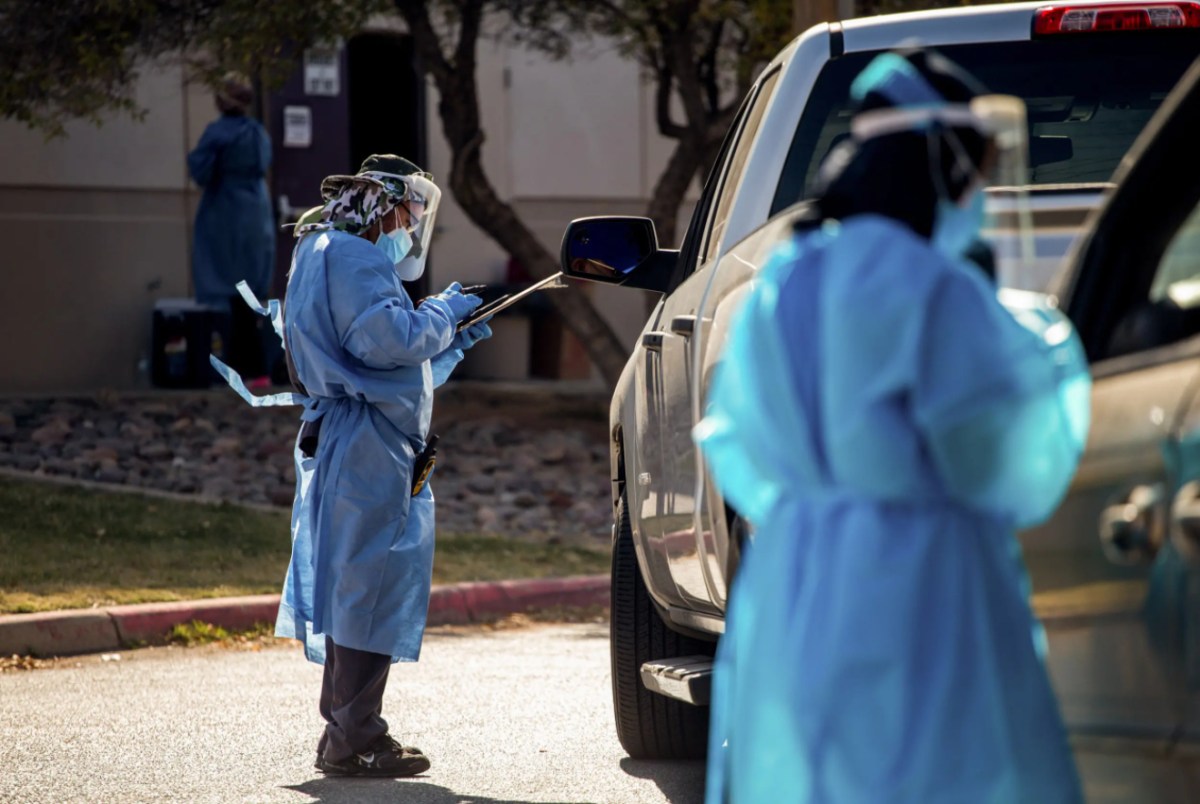 Top Texas officials again urged health care providers to administer more coronavirus vaccines Tuesday, the same day the state reported that the proportion of Texans whose coronavirus tests come back positive has hit levels not seen since a summer wave of cases that overwhelmed some hospitals.

The state reported Tuesday that 163,700 Texans had been vaccinated with at least one dose of the vaccine. About 1.2 million doses have been allocated to providers across the state through the first three weeks since their arrival, according to the Department of State Health Services.

“A significant portion of vaccines distributed across Texas might be sitting on hospital shelves as opposed to being given to vulnerable Texans,” Gov. Greg Abbott said in a tweet Tuesday evening.

That tweet came after health officials asked providers that received doses of the COVID-19 vaccine to “immediately vaccinate” all eligible Texans, including people 65 and older and those who are at least 16 with a qualifying medical condition. That renewed push echoed a statement Dr. John Hellerstedt, commissioner of the Texas DSHS, sent to providers last week directing them to “administer their entire allotment with all deliberate speed.”

“Dr. Hellerstedt put out that statement today to make it clear to all providers that people over the age of 65 and people with medical conditions that put them at greater risk of severe disease of death from COVID-19 are eligible to receive vaccine now,” said spokesperson Douglas Loveday. “Vaccine supply remains limited but more vaccine will be delivered to providers each week. It will take time to vaccinate everyone in those priority groups.”

Texas officials’ push for providers to administer more vaccines comes as Texas’ seven-day average COVID-19 positivity rate has remained above 15 percent for one week, according to data the state released Tuesday. And that sustained rise in the rate comes one day after the state reported a record number of Texans hospitalized with the virus.

“We can expect an increasing surge in case numbers over the coming weeks as a result, and not far behind the surge in cases will be a surge in hospitalizations and potential fatalities,” said Angela Clendenin, an epidemiologist and biostatistician at the Texas A&M University School of Public Health.

Clendenin said the rising positivity rate is likely in part due to a greater number of tests among people who are asymptomatic and those who have only mild symptoms.

On Tuesday, the state reported that 17.15 percent of molecular coronavirus tests came back as confirmed cases over the last seven days. The seven-day average positivity rate has remained above 15 percent since Dec. 22.

Abbott in May said that a sustained positivity rate above 10 percent was cause for alarm.

“If the positivity test rate is more than 10 percent, that’s one of those red flags that we begin to look at,” Abbott said at a May 5 press briefing.

But in recent months, Abbott has repeatedly sworn off any new shutdowns. Instead, he has pointed to a statewide mask mandate that remains in effect and certain occupancy reductions that are triggered when the proportion of a region’s COVID-19 patients exceeds 15 percent of hospital capacity for seven days. A Texas Tribune analysis found those restrictions did little to ease burdened health care systems in areas hit hardest by the virus.

“Gov. Abbott continues to rely on the data-driven hospitalization metrics used by doctors and medical experts to help inform and guide the state’s ongoing efforts to mitigate COVID-19,” said spokesperson Renae Eze. “As some communities experience a rise in hospitalizations, the state of Texas is working closely with local officials to quickly provide the resources needed to address these spikes and keep Texans safe, including surging medical personnel and supplies.”

In September, the Texas DSHS began publishing a new version of the state’s positivity rate. It takes into account the date a test was administered, not when it was reported. That change in reporting revealed that the share of people receiving positive test results was higher in the spring than originally disclosed.

Texas’ rising positivity rate is the latest in a series of metrics that has worried public health experts, particularly in the midst of the holiday season which could exacerbate an already spreading virus.

On Monday, the state reported more Texans were hospitalized with the virus than at any point during the pandemic. And earlier this month, the state’s stock of available intensive care beds sank to its lowest point yet. There were 11,775 people in hospitals on Tuesday and 653 available ICU beds.

Two weeks ago, Texas began vaccinating front-line health care workers and nursing home residents and staff, marking a significant first step in the fight against the coronavirus. But experts estimate that it will take between six and nine months for the COVID-19 vaccine to be widely available.

“It is more important than ever, where we find ourselves today, to remain extra vigilant about physical distancing, mask wearing, good hand hygiene, and avoiding non-essential travel and gatherings with others outside of our households until the vaccine becomes widely available and a significant number of people become vaccinated,” Clendenin said.

Mandi Cai contributed to this story.

This article originally appeared in The Texas Tribune, a nonprofit, nonpartisan media organization that informs Texans – and engages with them – about public policy, politics, government and statewide issues.