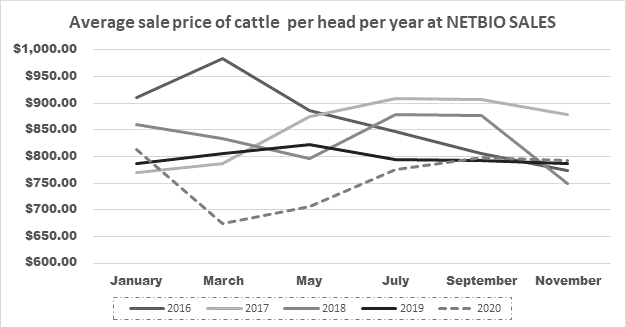 This applied research investigation compared yearly pre-conditioned cattle sale prices during five consecutive years. The results indicated a significant difference between beef prices of preconditioned cattle during 2020 when compared with all other previous years (2016-2019).

The objective of this applied research was to identify the impact of year seasonality in sale- price variation according to year of sale of similar pre-conditioned cattle sold in comingled cattle auction format in Hopkins County.

A total of 153,271 pre-conditioned cattle where comingled, sorted in groups and sold to the highest bidder in an auction format setting in six bi-monthly sales during four consecutive years. Average sales prices (net) were compared by year using statistical analysis (ANOVA and Tukey HSD) in a personal computer.

In the 1990s, Extension Specialists at Texas A&M University developed a set of standardized calf health management protocols to guide producers in adding value to calves. Since weaning and shipping are both stressful events in a calf’s life, the time lapse between weaning and shipping is important. By separating these stressors, the immunosuppressive impacts of each event are not combined, which reduces overall stress. Therefore, separating weaning and shipping, when combined with a sound vaccination protocol, further enhances the value of calves and is rewarded in the marketplace.  To seize economic benefit of pre-conditioning programs, a partnership between Texas A&M AgriLife Extension- Hopkins County, a group of organized beef producers and the Sulphur Springs Livestock Auction created the Northeast Texas beef Improvement Organization (NETBIO) and implemented periodical preconditioned cattle auctions. After 18 years of yearly sales, and because commissioned cattle numbers surpassed handling capacity of auction barn, bi-monthly sales were implemented in 2016.  During early 2020 the negative impact of COVID-19 on the March sale (March 2020 vs March 2019) was -$131.03 per head (average) or -$ 484,548.94 (all cattle ticketed sales). Average sale prices improved as the year continued to reach expected sale prices in November Sale.

The Texas A&M AgriLife Extension Service in Hopkins County will like to recognize the support of NETBIO during the development of this investigation.

Trends in Nutrition for 2021 and Beyond by Johanna Hicks, Family & Community Health Agent