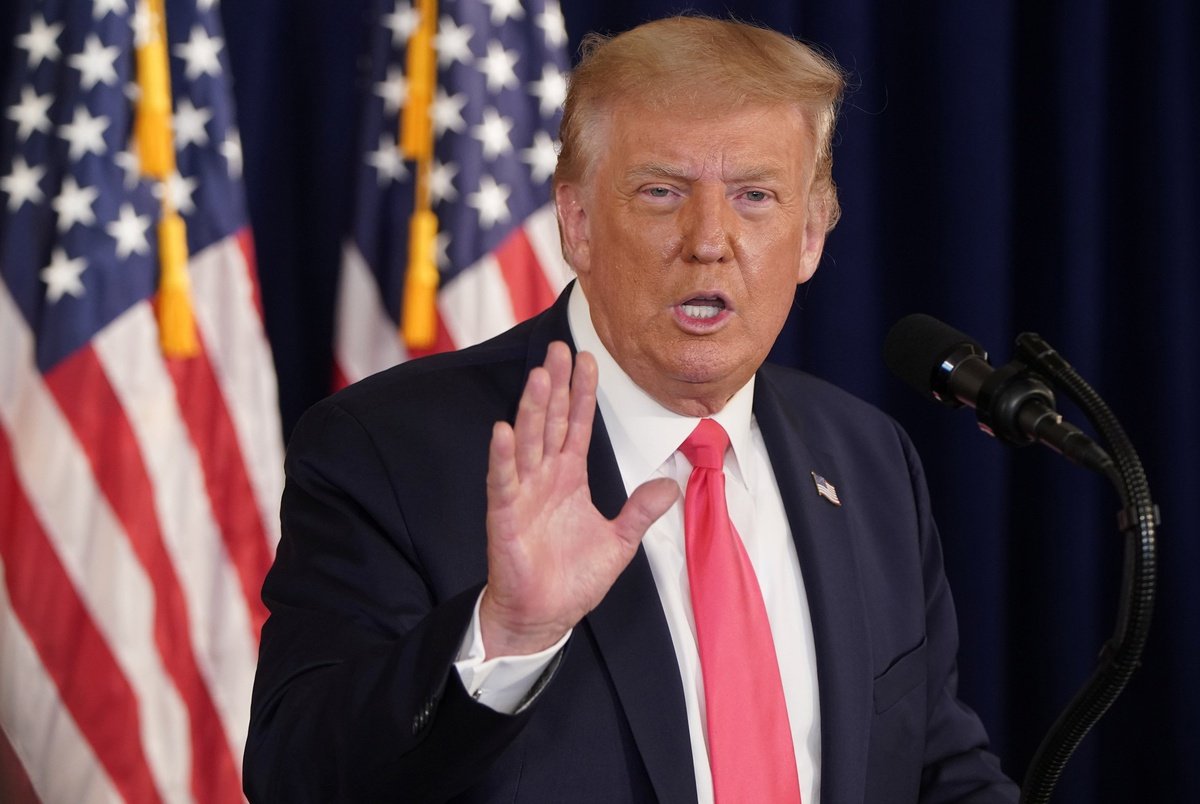 After holding the bill up for nearly a week, White House officials didn’t explain why he decided to suddenly back down and sign a bill into law he had just days earlier referred to as a “disgrace.”

Trump signed the bill while vacationing in Florida and on a weekend when he had allowed unemployment benefits for 14 million Americans to expire.

He had demanded changes to the stimulus and spending package for a week, suggesting he would refuse to sign it until these demands were met. This continued defiance caused lawmakers from both parties to panic over the weekend, worried about the implications of a government shutdown during a pandemic. It was unclear what prompted him to change his mind late Sunday, but he was under tremendous pressure from Republicans to acquiesce.

In a statement he issued after signing the law, Trump released a long list of false claims and grievances. He said he would be sending a “redlined” version of the bill back to Congress “insisting that those funds be removed from the bill.”

Trump is only president for less than a month, and lawmakers are likely to ignore any such request.

In the same statement, he said “much more money is coming, and I will never give up my fight for the American people!”

After Trump signed the bill into law, Democrats attacked him and said his decision to drag the process out for days was harmful to many Americans.

“The President’s pointless delay in approving the relief legislation cost millions of Americans a week’s worth of pandemic-related unemployment assistance that they desperately need,” said Richard Neal, D-Mass., chair of the House Ways and Means Committee. “His stalling only intensified anxiety and hardship for workers and families who are collateral damage in his political games. Now, people will need to wait even longer for direct payments and other vital assistance to arrive.”

The government would have shut down Tuesday if Trump hadn’t acted. In addition to containing money to fund government operations, the spending package also includes emergency relief money that finances a new round of stimulus checks, unemployment aid and small-business assistance, among other things.

Trump hinted Sunday evening that there had been a development when he tweeted that there was “Good news on Covid Relief Bill. Information to follow!”

Congress overwhelmingly passed the bipartisan bill Monday night, and Treasury Secretary Steven Mnuchin praised it, something congressional leaders in both parties interpreted as a sign that Trump was supportive. But the president released a video Tuesday demanding changes. He said, among other things, that the bill should have authorized stimulus checks of $2,000 per person instead of $600 payments. Trump also wanted spending cuts to be included in the package, a concern he hadn’t raised until after Congress passed the bill.

Before the video was posted, Mnuchin had said that the stimulus checks could be sent as soon as this week. The $600 payments had been Mnuchin’s idea to begin with. It’s unclear whether the roughly weeklong delay would push back the issuance of the payments or if they could still go out this week.

Trump’s declaration that he wanted changes made to the bill stunned congressional leaders and even many White House aides. The spending and stimulus bill had been negotiated with Mnuchin and other White House officials, and the treasury secretary had praised the legislation in a Monday CNBC appearance.

In recent days, Trump issued a number of tweets appearing to continue his insistence on the $2,000 checks. Authorizing the larger checks, however, didn’t seem politically feasible in time to avert a shutdown Tuesday. Many Democrats were supportive of the idea of larger stimulus checks, but a number of Republicans were opposed. And approving such a change without unanimous consent in one day is not possible.

The consequences of inaction were immense.

If the bill wasn’t signed into law by Tuesday, hundreds of thousands of federal employees would have been sent home without pay. And even the many federal employees who would have continued to work because they are deemed “essential,” such as members of the military, would not have been paid until a new funding bill is authorized.

In addition to a government shutdown on Tuesday, eviction protections for millions of Americans would have lapsed later this week; more than 14 million people would be losing unemployment benefits; and no stimulus checks would be issued. Failing to sign the bill into law would also freeze new money for vaccine distribution, small business aid, the ailing airline industry, and school aid, among other things.

Earlier Sunday, lawmakers expressed a mix of frustration and fury that Trump had not signaled publicly what he planned to do.

“I understand he wants to be remembered for advocating for big checks, but the danger is he’ll be remembered for chaos and misery and erratic behavior if he allows this to expire,” Sen. Pat Toomey, R-Pa., said on Fox News on Sunday. “So I think the best thing to do, as I [said], sign this and then make the case for subsequent legislation.”

Sen. Bernie Sanders, I-Vt., said on ABC News the president was behaving as an “extraordinary narcissist” and was almost “pathologically narcissistic” in his 11th-hour crusade against the bill.

“It is insane. It is really insane, and this president has got to finally … do the right thing for the American people and stop worrying about his ego,” Sanders said.

Millions of Americans who have lost their jobs during the pandemic and are still struggling have no choice but to await the president’s decision.

Deseree and Matthew Cox have had almost zero income since August, when Matthew was let go from his management job in pest control. His application for unemployment benefits from the state of Florida has never made it through the system’s queue. The $300 per week Matthew, 38, scrapes together driving for DoorDash hardly makes a dent covering bills, rent and food for themselves and their two children with special needs.

The Coxes have depleted their savings and moved from South Florida to the Indianapolis area for cheaper cost of living and to be near family who could help with child care. But they say they need the extended unemployment benefits, rental assistance, extended eviction moratoriums and direct payments promised by Congress’ stimulus package.

At one point, Deseree, 37, said she couldn’t afford a medication her son needs “just for him to be able to function.”

“People will die without this money,” Deseree said. “People will get evicted. People will not be able to get their medication. To [lawmakers], $600 or $2,000, it seems so little. But to the American people right now, it’s just everything.”

Since the president posted the video Tuesday, White House aides have not offered any public briefings on his strategy or plans. Instead, Trump has issued a series of tweets reiterating his demand for changes but not saying much more. Vice President Pence is in Vail, Colorado, and has also been out of sight in recent days.

The White House had provided virtually no information about what its plans were to head off the potential economic calamity of a shutdown and the failure of the relief effort. A White House spokesman declined to comment when asked about the president’s intentions. Negotiations between congressional leaders and the administration were at a complete standstill on Sunday, and a backup plan had not materialized.

Before Trump signaled that he would sign the bill after all, people close to the White House described a chaotic scene in which senior officials anxiously await the president’s next move. Republicans had expressed increasing concern that by refusing to sign the bill, Trump could hurt the party’s prospects in the Georgia Senate races Jan. 5. If Republicans lose those two seats, Democrats would control the chamber.

On Sunday, Trump said he planned to travel to Georgia on Jan. 4 to help campaign for the two Republican candidates.

“Everybody in the White House is trying to figure out what’s in Trump’s head, if this is a bluff or if he’s going to carry this out. He’s been confronted with all the facts and evidence,” said one person briefed by several White House officials over the weekend, speaking on the condition of anonymity to reveal internal discussions. “Nobody knows what Trump is going to do. It’s a bizarre situation.”

One person who interacted with Trump in Palm Beach in recent days said the president had not discussed the economic relief bill or the looming government funding deadline. Instead, Trump had been far more focused on his failed effort to reverse the election result, lashing out at Republicans in Congress and members of his own administration for not joining him in the fight.

Trump tweeted several times over the weekend to criticize the aid package, saying, “Increase payments to the people, get rid of the “pork.” He also tweeted, “$2000 + $2000 plus other family members. Not $600. Remember, it was China’s fault!”

Increasing the stimulus payments from $600 per person to $2,000 per adult would add roughly $370 billion to the cost of the bill. In the CARES Act, which passed in March, lawmakers approved stimulus payments of $1,200, which went out to more than 100 million Americans.