Vaccinations are underway for Texas’ front-line health care workers: “I can’t believe this is happening” 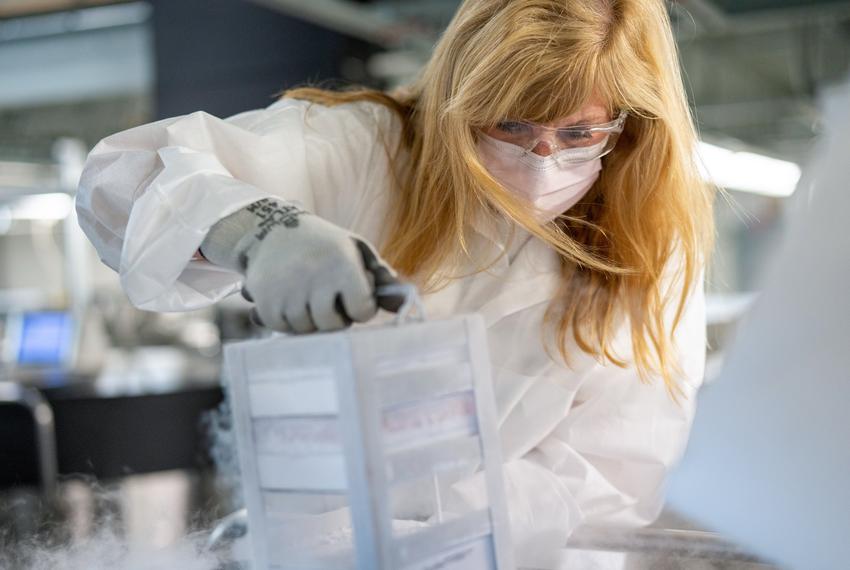 First, a pinch in the arm.

Then, a sense of relief — and at the same time disbelief — washed over Chad Bush, a North Texas health care worker. Bush, a CT technologist said he was the fourth person at Methodist Dallas Medical Center and among the first people in Texas to get the coronavirus vaccine on Monday.

“God, it’s just, I can’t believe this is happening,” he said in an interview with The Texas Tribune. “And I mean, there’s a sense of relief for myself, but a sense of relief knowing that I’m doing what I can as a health care worker to protect other people from this disease as well.”

The Dallas facility received 5,850 doses delivered by UPS trucks around 8 a.m. on Monday. It was among four Texas sites that have so far received a total of 19,500 doses of the vaccine in the first phase of a rollout that will put a quarter-million doses into 109 Texas facilities this week — with more on the way next week, said Chris Van Deusen, spokesman for the Texas Department of State Health Services.

Texas has 1.4 million doses allocated through the end of the year.

Bush works every day with hospital patients who have or could have COVID-19. When he goes home, he takes care of his elderly mother who lives with him. Bush is diabetic and has high blood pressure, and his mother has chronic obstructive pulmonary disease and emphysema, meaning they’re both at high risk for complications from the virus.

Bush is scheduled for his second dose of the vaccine, which is necessary to strengthen its effectiveness and extend the inoculation past a few months, on January 4.

“I cannot explain — the amount of stress that has been lifted off me having this today is enormous,” Bush said. “I fully expected it not to happen today. I just thought there’d be some logistical issues, something, because I wanted it so bad, and I guess I was preparing myself for the worst.”

The virus has claimed the lives of nearly 24,000 Texans and nearly 300,000 nationwide, and the anxious anticipation of the vaccine’s arrival cannot be overstated — particularly among Texas’ front-line health workers, who will be in the “first tier” of recipients and who sacrificed their safety to save the lives of others even as they deal with their own tragedies.

Texas Gov. Greg Abbott attended a White House briefing on Monday with other state and federal officials on “Operation Warp Speed,” the public-private effort initiated by the U.S. government to get the vaccine developed and distributed, his office said in a statement.

“As Texas begins distributing the COVID-19 vaccines across the state, I thank President Trump and the federal leaders who worked diligently to ensure the success of Operation Warp Speed,” Abbott said. “These vaccines will save lives and play a crucial role in our efforts to mitigate the spread of COVID19 and bring hospitalizations down in our communities.”

After the first person at the Dallas hospital went behind the privacy screen to get the vaccine, which was approved by federal authorities on Friday, a crowd erupted with cheers and clapping, Bush said.

Over the next 36 hours, Methodist expects to vaccinate between 500 and 600 staff members, Methodist Health System CEO Jim Scoggin said, according to the Dallas Morning News.

“Today is a very exciting day,” said Amy Young, chief clinical officer at the facility, where vaccinations will begin on Tuesday morning. “It’s a huge shot in the arm.”

In Houston, the vaccine showed up before dawn at the MD Anderson Cancer Center.

In San Antonio, UT Health San Antonio received 5,800 doses early Monday and plans to begin vaccinating 1,000 health care workers a day starting Tuesday, according to a Tweet by officials at the site.

“This has been a tough year and a lot of work,” said Dr. Jason Bowling, who works with infection prevention at UT Health San Antonio. “People are tired. But I think this is a nice way to kind of inspire people that we’re making progress.”

Bowling said he’s “super excited” about the vaccine and glad to have an effective way to protect health care workers beyond personal protective equipment and other safety measures.

“It’s so nice to have this added tool in our tool belt to really provide confidence that we’re going to keep people safe, so that we can take care of people that are sick without having health care workers get sick,” Bowling said.

Another 75,075 doses will be arriving at 19 sites in 12 cities on Tuesday, including facilities in Edinburg, El Paso, San Angelo, Corpus Christi, Galveston, Amarillo and Lubbock, among others. Many of the early facilities are at universities.

Vaccine doses for the remaining 86 sites will begin shipping later in the week, he said.

More vaccines are expected to arrive in Texas the week of Dec. 21, likely including doses from Pfizer and Moderna, whose vaccine is expected to get federal approval by the end of this week, Van Deusen said.

“We anticipate that over the next 10 days, we will vaccinate approximately 2,900 healthcare providers that are on the state tiers for priority,” Young said. “This is the first step toward the future and returning to some sort of normalcy for the health care environment and eventually for all of our country and our population.”

She and other health care officials said it’s important that the population remembers to continue social distancing, mask-wearing and hand-washing practices until the general population can be vaccinated to the point where the virus is no longer spreading. The timeline for that could stretch for several more months, experts say.

Bush got his vaccine in his left arm where he has a tattoo of a cross going through a heart with the words “God is everything or else he is nothing,” a message that he said has carried him through the pandemic. “When this first started, things were changing literally by the hour. I just had to put my faith in God to get me through it. That’s all I had,” he said.