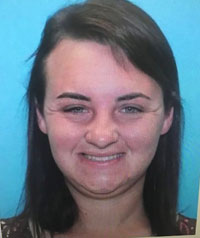 It’s often said, “buyer beware,” but sellers should, too. Especially when the goods are worth thousands of dollars.

On April 4, Kelsie Jordan Wright, 31, purchased a show steer for $3,001 in an online auction. She arranged for another buyer to pick up the steer and meet her in Canton. What she didn’t arrange was payment.

Texas & Southwestern Cattle Raisers Association Special Ranger Mike Barr said after months of attempting to collect, the victim reached out to him for help. During his investigation, he learned the steer was purchased with Wright’s husband Austin Gentzel.

Gentzel contacted the victim to offer to make payments on the steer. The victim declined but offered Gentzel and Wright an additional week to come up with the full amount. Six weeks passed, and still no payment was received, despite the victim continuing to attempt to collect the debt. Calls from Barr to Wright and Gentzel were not returned.

Wright’s current residence is in Sulphur Springs, but she has also recently lived in El Paso, Sherman, Collinsville and Tyler. Due to the multiple jurisdictions, Barr called in fellow Texas & Southwestern Cattle Raisers Association Special Rangers Larry Hand and Bo Fox. A warrant was served, and the defendant turned herself in to the Rains County Jail in Emory, Texas. Wright is out on $5,000 bond awaiting trial. The formal charge is theft of cattle/horses/exotics, less than $100,000.

He also wants to remind cattle raisers they can never be too careful — especially when dealing with buyers or sellers they don’t know.

“Unfortunately, not everyone you’ll meet is honest,” Barr said. “And tough times like these can lead to an uptick in theft and fraud.”