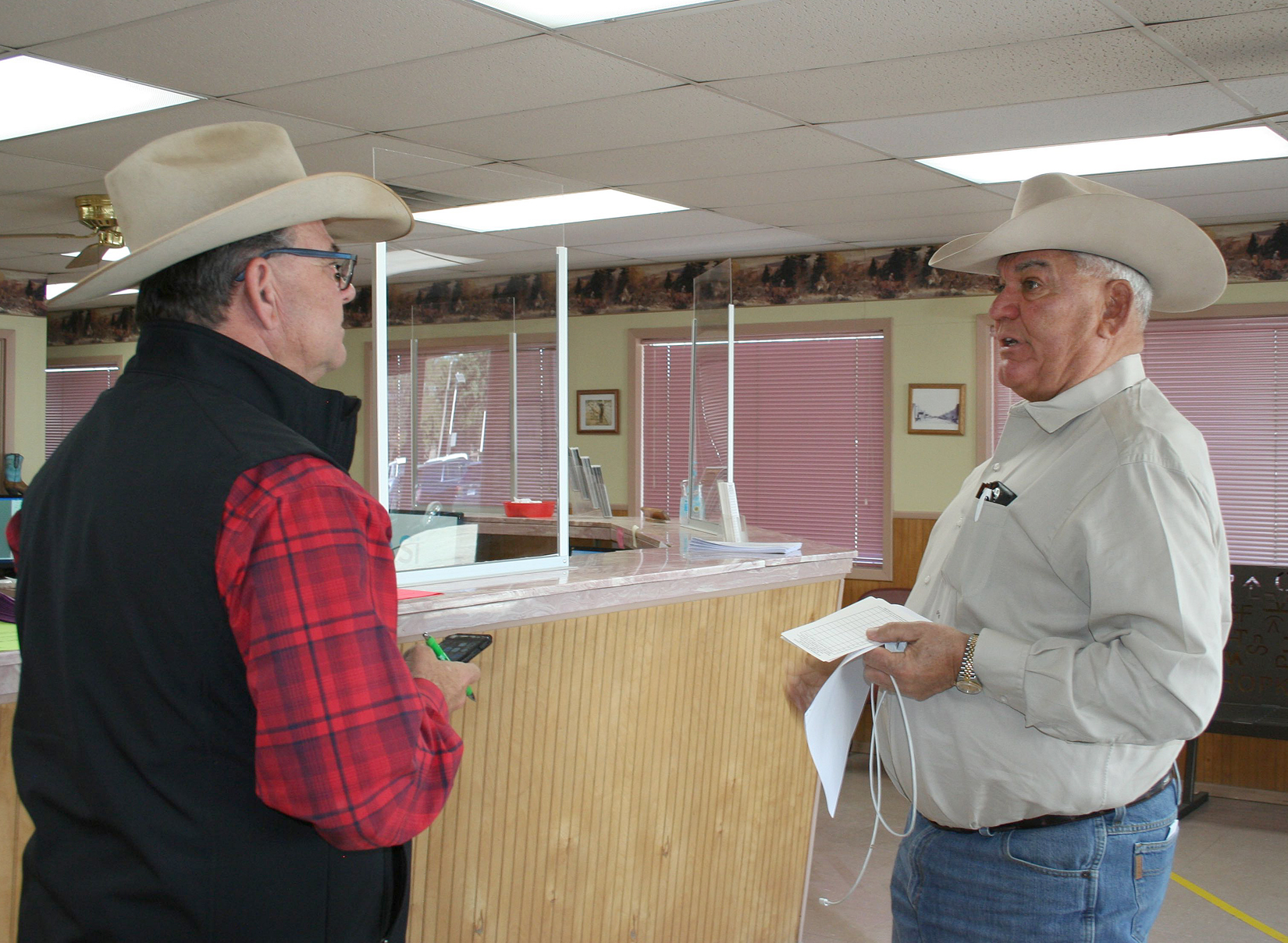 Joe Don Pogue, left, co-owner and auctioneer of the Sulphur Springs Livestock Commission, and cattleman and buyer Charlie Sellers discuss the cattle business prior to the NETBIO 22nd anniversary sale that was held Wednesday.

The Northeast Texas Beef Improvement Organization (NETBIO) marked the completion its 22nd year of operation Wednesday with a barbecue luncheon and pre-conditioned calf and yearling sale.

NETBIO is a group of independent cow/calf producers and agribusiness representatives – numbering over 800 members – who work together to enhance the beef industry in Northeast Texas. The organization is recognized across the State of Texas and the Southeastern United States as the leader in its reputable offering of pre-conditioned cattle.

The anniversary sale and celebration kicked off with a barbecue meal that was enjoyed by producers, buyers, and friends. Following the lunch, auctioneer Joe Don Pogue gaveled the sale of 5,615 head of cattle into action.

“It was a very good anniversary sale for the organization and offered a lot of good cattle,” Sulphur Springs Livestock Commission co-owner and NETBIO board member David Fowler said. “The NETBIO producers sold some of the best cattle we have had at our sales.”

Fowler said a total of 240 producers consigned cattle to the sale and did their usual great job of pre-conditioning their cattle and getting them ready for the sale.

Demand was good, and the cattle sold to 34 buyers for an average of $792.98 per head. A total of 208 head were sold to buyers over the Internet.

Those who missed this anniversary sale have an opportunity to attend another NETBIO sale at the Sulphur Springs Livestock Commission in December.

Due to the increased demand, NETBIO officials have added a December 16, 2020 pre-conditioned calf and yearling sale to close out the year. NETBIO member-producers have already consigned more than 3,000 head of cattle to the sale. The sale, like all others, will begin at 1 p.m.

NETBIO has announced a new sale day and new weaning requirements for cattle entered into the pre-conditioned calf and yearling sale.

Beginning in 2021, NETBIO sales will have a new sale day and new weaning requirements. Board members have decided to change the sale days from the third Wednesdays to the third Fridays of the months that they hold sales. It has also been decided that all cattle entered into the sale must be weaned for 60 days instead of 45 days.

NETBIO CEO Dwyatt Bell and board members announced that these changes will start with the January 15, 2021 sale.

“We feel these changes will be the best way for us to handle and market NETBIO producer/member cattle as we move into the 23rd year of producing quality pre-conditioned cattle” Joe Don Pogue said.

FrontPorchNewsTexas.com Closed Due to Power Outage