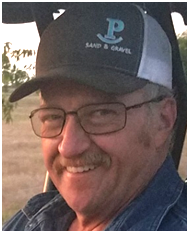 Raymond Harold McDonald Jr. entered this life on June 27, 1963 in Carlsbad, New Mexico. He was born to Harold and Beth McDonald, the baby of six children. He worked on the family farm and drove trucks for his older brother until he married the love of his life, Margarett McClary McDonald on August 03, 1984. She moved him to Dike, Texas where they built a life and family together. Raymond drove an 18 wheeler for 20 years before finding he had a special gift for diesel mechanics. He loved to work and was most recently employed at Waste Connections in Sulphur Springs but invested many hours at Waste Management, Sanitation Solutions, Parmer Truck and Trailer, Suburban Propane.Raymond loved the Lord and was a member of Southside Church of Christ.

He is survived by his loving wife, Margarett; daughter, Jennifer Stanley and her husband, Jordan of Dike, Texas; daughter, Elizabeth Henderson and her husband, Shane of Detroit, Texas; daughter, Katelyn Coberley and her husband, Jeremy of Dike, Texas; son, Wesley McDonald and special friend, Sierra Calderon of Loving, New Mexico. Seven grandkids, who brought him so much joy; Jase and Jesse Stanley,Karson and Mason Coberley, Kennedy, Kora and Kason Henderson. He is also survived by three brothers and a sister, David and wife Vicky, Henry and Wife Nancy, Glen and wife Barbara, and Rob and Brenda Patton all of Loving, New Mexico. Many cousins, nieces and nephews also survive him.

He was preceded in death by his parents, Harold and Beth McDonald and brother, Larry.