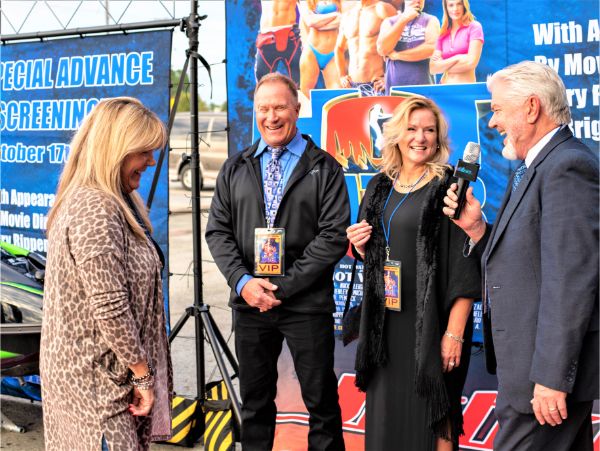 SULPHUR SPRINGS, TX – On October 17th, Jettribe hosted an advance showing of the Hollywood movie “Hot Water” at Bright Star Cinemas in Sulphur Springs, TX. The red-carpet event welcomed not only local business owners and community members, but also the movie director, Larry Rippenkroeger and his beautiful wife Paula flew in from the West Coast for the special advance showing. It was the first time the movie would hit the big screen and Jettribe was honored to host the exclusive affair with support from the local community and the host theater.

The action-comedy “Hot Water” (streaming online later this year) focuses on a young jet ski racer who gets his dream shot to compete on the pro jet ski tour. Coached by a legendary champion and his fun-loving mechanic, the film is full of action, romance, and laughs. The film pushes the PWC racing industry to the next level, and the sport is fortunate to have Larry lend his talent to give the public a taste of what the sport has to offer.
Larry’s dream of directing a movie about jet ski racing was conceived decades ago when his passion for the sport led him to a successful career as a pro jet skier. It was his talent fueled by his passion that continued to pave his way to Hollywood. Larry worked on over 100 feature films as a stuntman and stunt coordinator since switching focus from sports to the film industry in 1994.
Jettribe and Larry have a multi-decade relationship.  The staff believed strongly in seeing Larry’s lifelong dream movie come true, and they were honored to support the project by providing the racing wetsuits, life vests, as well as apparel for the actors.  Jettribe products have been featured in TV projects in the past, but this was the first major film to feature the brand in such detail, both off the water and during high adrenaline racing scenes.
Jettribe was grateful Larry was able to spend time in Sulphur Springs before the event and was able to speak with local high school educators and students about the movie industry. They were thrilled to have Larry share his real world stories and advice for aspiring film students.

Sulphur Springs’ very own crème de la crème arrived to the event in head-turning sports cars and classic vehicles worthy of starring in their very own Hollywood films. From a sleek black McLaren to a classic El Camino in mint condition.  Jettribe is thankful for the support from the local community who attended the event.
Guests looked dazzling in their formal attire as they were greeted by Jettribe models Julia and Clarissa, who themselves looked beautiful donning Jettribe Trophy Girl Dresses. Mr. Bill Owens entertained the crowd with a series of interview questions for the movie director that ranged from “laugh out loud” reactions, to questions of which the answers served to inspire those that dream big. One question the director was asked was “What advice do you give to those wanting to join the film industry?” Larry responded by saying “Never give up.” Larry is a prime example of how never giving up on one’s dreams is the key to making them come true.
Jettribe would like to give a special thanks to Larry and his wife Paula for being such an inspiration to us all, Kathy Mitchell Lee with Bright Star Cinemas for hosting the evening, Bill Owens for being our official M/C, and thanks again to everyone who attended.