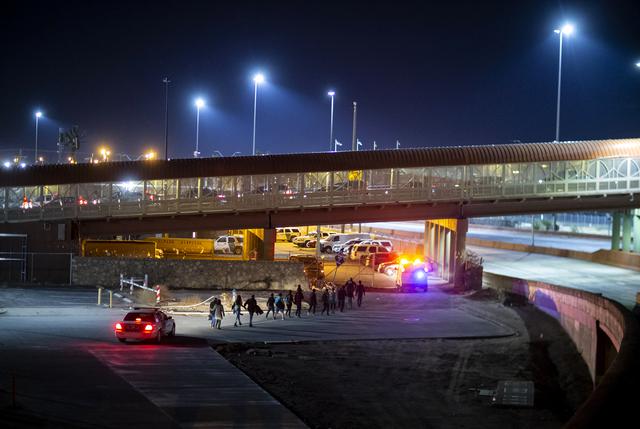 EL PASO — The number of people who were apprehended by or surrendered to federal immigration officials on the U.S.-Mexico border dropped by more than 50% this year but jumped sharply in September, the Department of Homeland Security announced Wednesday.

U.S. Border Patrol agents apprehended 400,651 people on the southwest border during the 2020 fiscal year, which ended Sept. 30. Another 57,437 people arrived at ports of entry and were deemed inadmissible and turned away. The total is less than half of the 977,509 people apprehended or turned away in 2019, according to the agency.

But Trump administration officials highlighted the fact that the highest monthly total came in September, when apprehensions hit a 13-month high.

“As the economic conditions are worsening in Mexico and the entire Western Hemisphere due to COVID, get ready,” said Mark Morgan, the acting commissioner of Customs and Border Protection. “We’re already seeing the numbers increase.”

From 2015-18, apprehensions hovered between 415,000 to 553,000 before surging in 2019. During that time, the border saw an increase in family units and unaccompanied minors seeking asylum in the United States. The Trump administration enacted several policies to deter migrants, including the controversial “zero tolerance” policy in 2018 that prosecuted adults for illegally entering the U.S. and separated them from their children. After a sustained public outcry, the Trump administration ended the policy.

In Texas, only the Laredo Border Patrol sector saw an increase in the number of unaccompanied minors apprehended, from 2,521 in 2019 to 2,641 in 2020, a 5% jump. In the other four sectors along the Texas-Mexico border, the number of minors apprehended without an adult dropped between 32% and 70% this year. Apprehensions of families also dropped by as much as 90% in those sectors.

Ali Noorani, the executive director of the National Immigration Forum, an immigration advocacy group, attributed the decline to the COVID-19 pandemic and the administration’s increased border enforcement efforts. But he said the recent increases in apprehensions of family units and unaccompanied minors means that desperate migrants are still trying to reach U.S. soil.

“The Trump administration’s approach to border enforcement has been going on long enough that people understand that their chance of gaining [legal] admission into the United States is very slim,” he said. “But there is still something happening in Central America and Mexico that is leading them to make this decision.”

The only category of migrants that saw more apprehensions in 2020 was single adults: The 317,864 apprehended is a 5% increase from 2019. The majority were adult males from Mexico, who made up 56% of the total apprehensions. That’s a shift from 2019, when 64% were men from the Central American countries of El Salvador, Honduras and Guatemala.

“The Mexican economy is in a very fragile state, but until they get back on their feet or we have a rational border policy, these are the numbers that we are going to be faced with,” Noorani said.

The rise in apprehensions of single men can be partly attributed to the administration’s policy of rapidly returning unauthorized migrants to Mexico, sometimes within a couple of hours. That policy, known as Title 42 , has led to an increase in repeat attempts by individual crossers.

“Our recidivism has gone up dramatically, but it’s very geographically specific,” said U.S. Border Patrol Chief Rodney Scott. “Some areas it’s in excess of 50% and some areas it’s significantly lower.”