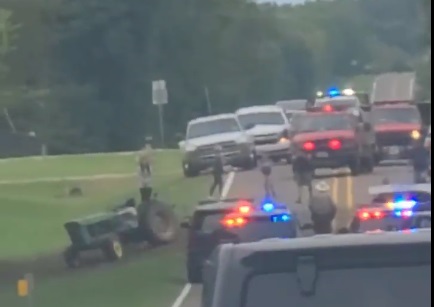 A video of a traffic accident that left a tractor running without a driver went viral yesterday. The driver of the tractor reportedly suffered minor injuries.

The driver of the tractor was reportedly traveling on FM 69 just north of FM 1537 yesterday when he was hit from behind a vehicle. The driver fell off the tractor when it was hit.

The tractor kept going without the driver and DPS responded to the scene. Traffic was stopped until the tractor eventually got itself stuck.

The driver reportedly suffered a broken ankle and cuts on his head.

Anthony Pennington posted video of the “Ghost Tractor” and the post went viral.

Anybody else see the ghost tractor today on 69?