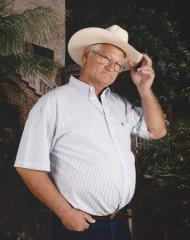 Robert Mitchell Alsobrook passed away in the comfort of his own home in Como, TX surrounded by his family and friends on August 3, 2020 at 6:23 p.m. He was a beloved Father, Papa, Brother, Cousin, Uncle, and Friend. His friends would say “when this guy is your friend you can bet you truly have the best friend a person could ask for and that alone is the biggest blessing.” Robert and his wife “Dyann” raised many children throughout their life. He was always proud to say he raised many children. Any child that came across his threshold whether he/she was blood or not they were his. Each and every one held a special place in his heart and has always been a part of his family. He was born on January 9, 1949 to Robert Lee and Gladys Alsobrook. He graduated Como High School in 1968. He served 3 years in the United States Army from 1968 to 1971. He was a proud Vietnam Veteran who loved his country. He married Mildred Dyann Smith on September 25, 1971. The two of them were married for 37 years until her death in 2008. He worked proudly as a longtime employee of Pilgrims Pride for 44 years (1971-2015) until his accident. He has always been a hardworking man who loved to stay busy on a farm. He loved animals and wherever he lived you always knew it was somewhere on a farm surrounded by animals and kids. Robert and Dyann Alsobrook had 6 children on their own. Not including the many others, they helped raise. He had 29 grandchildren and 15 great-grandchildren. He is preceded in death by his wife, Mildred Dyann Alsobrook; mother, Gladys; father, Robert Lee Alsobrook; mother in law, Beryl; father in law, David Smith; and two nephews, Dennis and Tim Cole. In his final hours he said “he would do it all over again. He was blessed to know each and everyone of you. He thanks each of you for being a part of his life”. Graveside service will be held at 1:00 p.m., Friday, August 7, 2020 at North Hopkins Cemetery with Bro. Mike Coker officiating. Pallbearers will be Joshua Alexander Sr., Justin Dixon, Randell Alsobrook, David Delgado, Andy Cockrum, and “JD” James Dale Collins. There will be a come and go visitation from 8:00 a.m. to 5:00 p.m., Wednesday and Thursday, August 5th and 6th at West Oaks Funeral Home.