Home Local News Gov. Greg Abbott warns if spread of COVID-19 doesn’t slow, “the next step would have to be a lockdown”
Local NewsTexas News

Gov. Greg Abbott warns if spread of COVID-19 doesn’t slow, “the next step would have to be a lockdown” 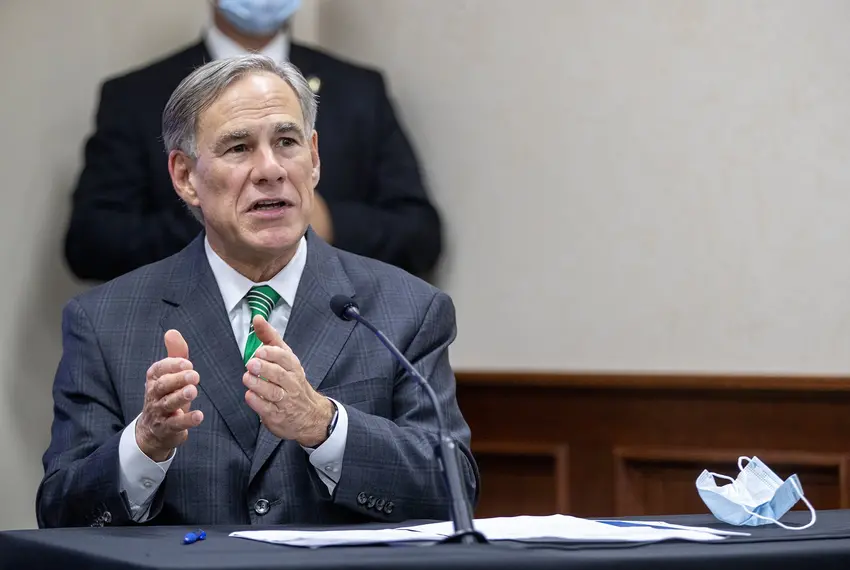 Gov. Greg Abbott gives an update on Texas hospital bed capacity and the state’s strategy for fighting COVID-19 during a press conference at Texas Department of Public Safety in Austin on Tuesday, June 16, 2020. Photo credit: Ricardo B. Brazziell/Pool via Austin American-Statesman

With Texas continuing to break records for new coronavirus deaths and hospitalizations last week, Gov. Greg Abbott reiterated Friday afternoon that things will continue to get worse. And if people keep flouting his new statewide mask mandate, he said, the next step could be another economic lockdown.

“Things will get worse, and let me explain why,” he told KLBK TV in Lubbock. “The deaths that we’re seeing announced today and yesterday — which are now over 100 — those are people who likely contracted COVID-19 in late May.

“The worst is yet to come as we work our way through that massive increase in people testing positive.”

Texans will also likely see an increase in cases next week, Abbott said, and people abiding by his face mask requirement might be the only thing standing between businesses remaining open and another shutdown.

Abbott has pushed that message repeatedly in television interviews this week. But he emphasized Friday that another shutdown was not imminent and he pointed to steps he has taken so far to scale back reopening in an effort to curb the spread of the coronavirus, including the mask order and a requirement that bars, once again, close their doors. He has also tightened restaurant capacity limits.

In three live television appearances Friday afternoon, Abbott acknowledged that his mask order — that Texans in counties with more than 20 cases wear masks in public — was neither popular nor convenient, but said it was important for everyone to join in the effort. His plea to Texans comes as nearly 80 Texas counties have opted out of the order order, while others are refusing to enforce it.

“I realize that a murderer or rapist or robber is far more serious to concentrate on. However, I know this also: If we do not all join together and unite in this one cause for a short period of time of adopting the masks, it will lead to the necessity of having to close Texas back down,” he said. “That should be the last thing that any government wants.”

As of Thursday afternoon, 2,918 Texans had died of COVID-19. The state also reported nearly another 10,000 new cases of the disease.

Nearly 9,700 people were in Texas hospitals on Thursday, too, the highest number since the pandemic began.

With cases of the virus and related hospitalizations rising at alarming rates, Abbott expanded his ban on elective medical procedures Thursday to cover more than 100 counties across much of the state. On Friday afternoon, he also extended his disaster declaration for all Texas counties in response to COVID-19.

“If we can get people across the state … to wear face masks, we will be able to keep the state open,” Abbott said in an interview with KSAT. “We will be able to reduce hospitalizations. But if this is not encouraged, if people do not adopt the best practice of wearing a face covering, it will lead to an increase in this rapid spread of COVID-19.”

In a statement following Abbott’s interviews, the Texas Democratic Party said any further shutdowns would be Abbott’s fault.

“By reopening Texas prematurely, Abbott put all of us at risk for rising cases and a second shutdown,” said spokesman Abhi Rahman. “That’s exactly what has happened so far. Abbott’s mismanagement of the coronavirus crisis has made Texas one of the most dangerous states to live in, completely tanked our economy, and shown the entire world just how incompetent Trump and Abbott are.”