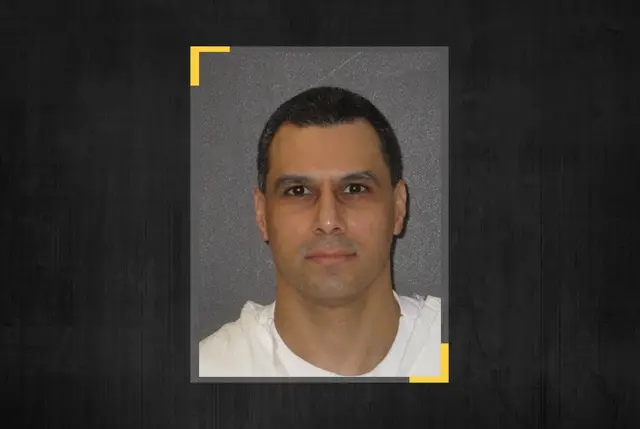 Texas is set to execute Ruben Gutierrez on Tuesday after he spent more than 20 years on death row and a decade fighting for DNA testing he claims could prove his innocence. He was convicted in 1999 in the brutal killing of an elderly woman during a Brownsville home robbery.

Unless Gov. Greg Abbott or the U.S. Supreme Court stops the execution, it will be the first in Texas carried out since the coronavirus pandemic swept the state.

Gutierrez’s latest appeals to the high court and the governor ask for a halt to his execution while the virus continues spreading in the state, DNA evidence goes untested and prison policy forbids religious advisers from being inside the death chamber. A federal judge halted the execution last week to review arguments on the religious policy and DNA testing, but the 5th U.S. Circuit Court of Appeals overturned the ruling Friday, putting the execution back on the calendar.

The Texas Court of Criminal Appeals began delaying executions because of the coronavirus in March — citing “the current health crisis and the enormous resources needed to address that emergency.” Gutierrez filed a similar motion to stay his execution earlier this month, but his lawyers told The Texas Tribune that the court denied it without any explanation.

At the Huntsville Unit, where inmates are executed, there were dozens of prisoners and multiple employees confirmed to have active cases of the coronavirus as of Saturday, according to Texas Department of Criminal Justice reports. The city of Huntsville, with seven prisons, has also had recent infection surges. Gutierrez’s attorneys argued in their filing that questions about staffing availability during the health crisis, close contact between employees and execution witnesses, the requirement that people to travel to an infected town and the lawyers’ limited ability to conduct interviews for final appeals should have led the court to delay the execution.

“No execution has occurred in Texas since the pandemic emerged, and under prevailing conditions it would be dangerous to change that now,” attorneys Shawn Nolan and Richard Rogers wrote in a letter to Abbott on Monday.

Gutierrez, 43, was sentenced to death for the 1998 stabbing and beating death of 85-year-old Escolastica Cuellar Harrison during a home robbery. Harrison lived in the mobile home park she owned and had about $600,000 in her house at the time of her death, according to court records.

Gutierrez, who knew Harrison through her nephew, was accused of the fatal robbery along with two other men, Rene Garcia and Pedro Gracia, according to court filings. Garcia, who pleaded guilty, is serving a life sentence; Gracia was released from jail before his trial on a $75,000 bond and has been wanted for more than 20 years.

After his arrest, Gutierrez told police he had been waiting in a park while the other two men robbed Harrison, but he didn’t know they were going to kill her. Days later, he said he had gone into the house with Garcia but that Garcia killed Harrison alone. But he quickly recanted that statement and said he “assented to it only after detectives threatened to arrest his wife and take away his children,” according to a court filing.

At the time of Harrison’s death, police preserved fingernail scrapings, a hair in her hand and blood stains, but DNA was never tested. Gutierrez has long fought to test the evidence, claiming it can prove he was not Harrison’s killer. But Cameron County prosecutors have argued that because there may have been multiple killers, tested evidence that didn’t match him still wouldn’t mark him as innocent. The appeals court agreed Friday, noting that in Texas, a defendant can be sentenced to death for acting as an accomplice in a capital murder.

“The problem for Gutierrez is that he was convicted without jurors needing to decide whether he was the actual murderer or an accomplice,” the panel of judges on the circuit court wrote in their Friday ruling. “A search for DNA on the victim’s clothing and elsewhere would not reasonably lead to evidence that would exclude Gutierrez as an accomplice.”

Aside from DNA testing, a new appeal pending before the U.S. Supreme Court centers on TDCJ’s execution policies. Gutierrez’s attorneys argue his execution should be stopped because TDCJ’s new policy banning chaplains from the execution chamber violates his First Amendment right to religious freedom.

The department’s policy used to allow TDCJ chaplains in the execution chamber, where the religious adviser would often pray and rest a hand on the inmate’s leg. But the policy was changed after a 2019 execution for a Buddhist inmate was stayed because TDCJ only had Christian and Muslim advisers on staff.

Rather than allowing spiritual advisers into the chamber who were not on staff, TDCJ officials, citing security concerns, opted to take the advice of Supreme Court Justice Brett Kavanaugh and change their policy to not allow chaplains of any religion into the execution chamber. Gutierrez is fighting again for a Christian chaplain.

The state has countered that Gutierrez could still consult with a chaplain or perform last rites in the moments before his execution, when he would have access to a spiritual adviser.

If it proceeds, Gutierrez’s execution would be the third this year in Texas, a relatively low number for the state tied to the long gap since the pandemic began. His lawyers have written a letter to Abbott asking for a 30-day stay in part because coronavirus cases continues to rise in Texas. His case has also caught the attention of Kim Kardashian West, a famous TV personality turned prison reform advocate. On Sunday, she tweeted at the governor, calling for a full review before Gutierrez is executed.