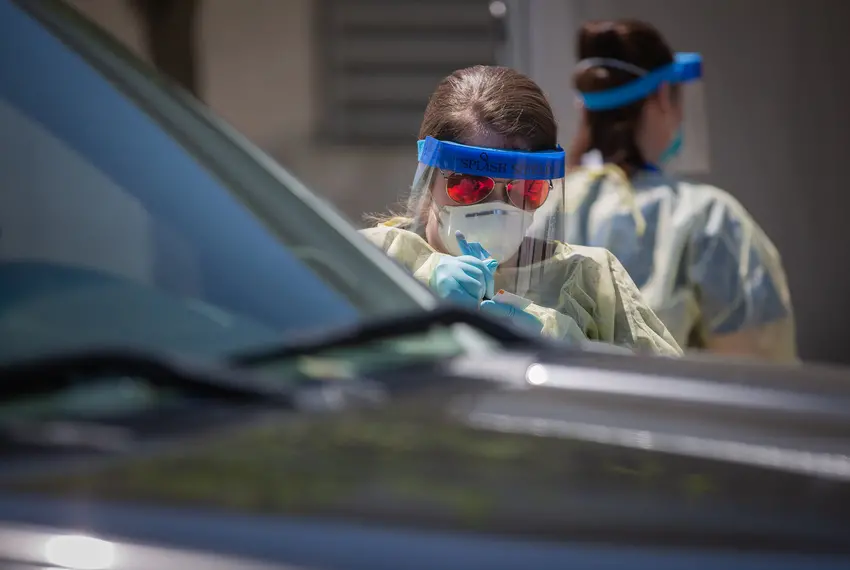 Texas hit a new daily high in COVID-19 cases Wednesday with 2,504 new cases reported, according to data released Wednesday by the Texas Department of State Health Services. That topped the previous daily high of 1,949 cases May 31.

Just over 21% of the new cases were reported in Jefferson County, which reported 537 new cases Wednesday, nearly doubling its previous total.

Asked about the cause of the increase, DSHS spokesperson Chris Van Deusen pointed to Jefferson County’s three state prison units.

Most of the new cases were “due to a change in how the local health department is reporting” cases from the prisons, he said.

Hot spots like prisons have recently started to do mass testing, and the data is not always reported daily.

One county, Pecos, had a reporting glitch in its data Tuesday that made it appear to gain 92 cases between Tuesday and Wednesday, he said. The glitch “underscores the provisional nature of this data,” Van Deusen said.

Gov. Greg Abbott ended a statewide stay-at-home order a little more than a month ago and set the stage for a phased reopening of businesses.

The statewide total was 863 cases above the seven-day average, a measure used to account for daily swings. For the third day in a row, Texas also reported the highest number of hospitalizations Wednesday, with 2,153 Texans being treated for COVID-19 in hospitals.

Correction: An earlier version of this story included the incorrect day that Texas COVID-19 cases hit a new record. It happened Wednesday.

Mandi Cai and Shannon Najmabadi contributed to this story.