Dallas residents call for police chief’s resignation, decreased police budget after use of force during protests 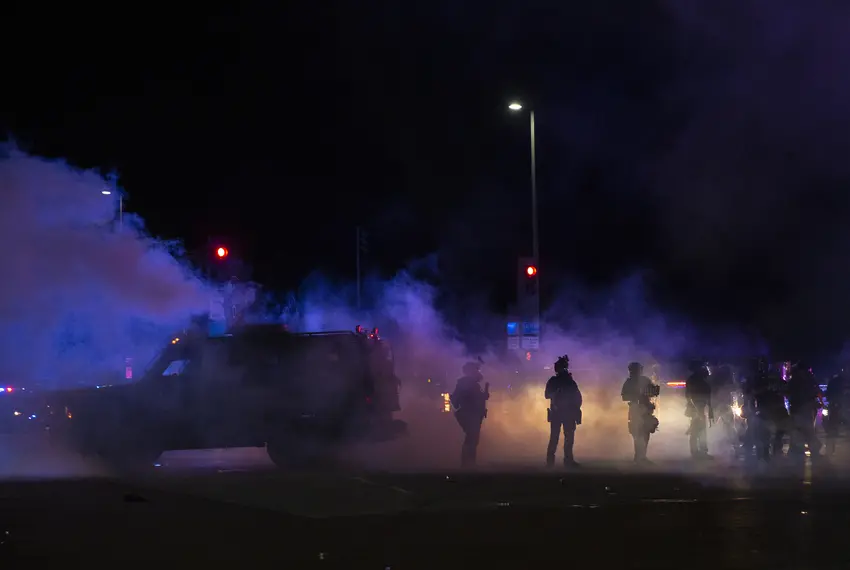 Dallas Police tactical officers stand among a cloud of tear gas and smoke after they fired it at protesters during a march against police brutality on May 29. Photo credit: Shelby Tauber for The Texas Tribune

With protesters still on the streets calling for reform, Dallas and North Texas residents called on the Dallas City Council to cut its police department’s budget, stop using tear gas on protestors, lift a citywide curfew and ask for Police Chief U. Renee Hall’s resignation at a specially called meeting Friday.

Those demands came during hours of public comments that follow days of protesting against police brutality and systemic racial inequalities during which Dallas police sparked criticism for their use of violence against demonstrators. While residents gave their names neither the city council speakers nor the livestream spelled them out.

“I’ve attended some of the protests that have occurred and witnessed the trauma of my loved ones being shot by rubber bullets and the indescribable trauma that’s come from this,” said one Dallas resident. “Dallas has blatantly refused to respect the constitutional rights of its citizens.”

Within the last week, Dallas police fired tear gas at large crowds of protesters and local media reported officers shot rubber pellets, injuring both a bystander and protesters, including one man who lost his eye.

The police department is also facing backlash from protesters and the public for its handling of Monday night’s peaceful protest. A protester who called into the meeting said while marching in the street police guided them onto the Margaret Hunt Hill Bridge, a signature structure that connects downtown to West Dallas. Officers in riot gear blocked off both ends of the bridge with a SWAT truck, shuttles and squad cars — giving protesters no way to exit, according to The Dallas Morning News. This crowd control technique is known as kettling.

More than 600 protesters were charged and arrested. But after initially defending the mass arrests, Hall announced Thursday night that she wouldn’t charge the 674 protestors detained during Monday night’s peaceful protest, The News reported.

“The mayor and council have a binary choice: You either hold DPD accountable right now or you endorse what happened on that bridge,” said one resident during Friday’s city council meeting.

He called for Hall and a number of other members of the police department’s leadership to be fired this week.

“Either hold the police leadership accountable by firing people this week or you’ll be held accountable a the polls,” the man said.

Facing questions from Dallas Mayor Eric Johnson about the rubber bullets, Hall said she still had not confirmed the use of the so-called less than lethal ammunition on the bridge.

“I’m still reviewing video every day,” said Hall, who kept her video turned off so she wasn’t visible during the virtual hearing. “I am not denying they were used. I’m saying at this point in time I’m not certain. I don’t know.”

Overnight Thursday, Hall announced an order that requires Dallas police to intervene when a fellow officer is using excessive force. But many people, including members of the council, demanded more action from the police chief and city manager.

Council member Cara Mendelsohn questioned why the department had not acted sooner to reform police procedures in line with the Obama administration’s 21st Century Policing recommendations from years before.

“Ironically, you’re saying change isn’t done overnight when we get a memo in the middle of the night,” Mendelsohn responded. “And this was all done in a week, so yeah, we could be moving a lot faster.”

Later during the meeting, City Manager T.C. Broadnax listed a series of changes the department was implementing, including a formal ban on chokeholds and forthcoming policies on warning before shooting and releasing body cam and dashcam footage of certain incidents. He also indicated Hall would conduct a review of the department’s use of force policies.

Kevin Felder, President of the Dallas NAACP and a former city council member, said Dallas has a decades-long history of police brutality against black people.

Felder urged the council to enhance de-escalation training for police officers; create a watchlist of officers involved in shootings and abuse of authority; and require officers to live in the city they serve. He also joined a number of people nationwide who are calling for the elimination of qualified immunity — a law that protects officers from civil lawsuits unless plaintiffs can show an officer violated a clearly established law or civil right.

Echoing Felder’s concerns, a number of callers asked the council to stop accepting equipment from the U.S. military and National Guard that they say militarizes police. Many also asked that city officials reduce the police department’s funding and divert that money into youth programs and education initiatives.

Zandra Ellis, a counselor with counseling services nonprofit Foundation 45, likened the city government’s relationship with its residents to the cycles of an abusive relationship.

Alexa Ura contributed to this report.