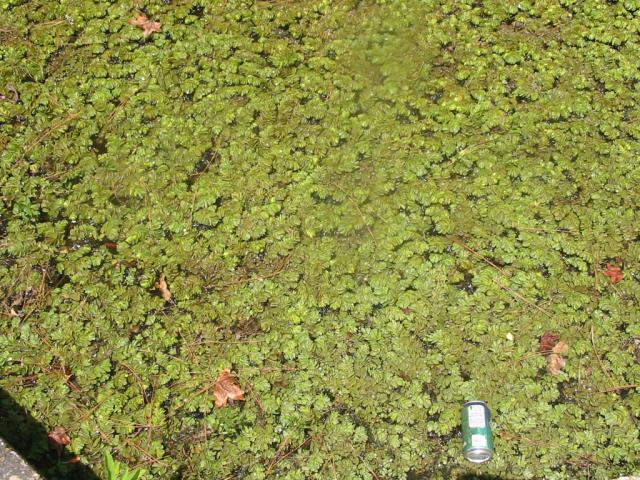 Common Salvinia is related to giant salvinia, and the best way to distinguish between the two species is the shape of the “hairs” on the leaf surface.  Each leaf hairs on common salvinia splits into four tips that do not connect at the top. By comparison, each giant salvinia leaf hair splits into four tips that connect at the top, forming an egg-beater shape.  Common salvinia typically does not grow as large as its more aggressive relative but can create issues like giant salvinia infestations by limiting recreational access and shading out native aquatic species, thereby reducing dissolved oxygen levels in water under the thick mats.

“As the temperature outside warms, we typically see increases of both giant and common salvinia growth on infested reservoirs,” said John Findeisen, TPWD’s Aquatic Habitat Enhancement Team Leader in Brookeland. “Herbicide treatments, in conjunction with the existing floating boom, will help us control further expansion of common salvinia on Lake Fork.  We hope to eradicate common salvinia similar to our twice-successful efforts against giant salvinia at this location,” Findeisen added.

Anglers and boaters recreating on any of the 19 lakes infested with common or giant salvinia, should be particularly vigilant about taking the following actions since both species spread easily and grow rapidly.  “We need lake users to thoroughly clean, drain, and dry their boats and equipment before leaving the boat ramp to prevent new infestations at other East Texas lakes,” said Findeisen.

All anglers, boaters, and lake-front property owners should learn to identify both common and giant salvinia as well as other invasive species that occur in Texas waters. The transport of aquatic invasive species can result in legal trouble for boaters. Transporting prohibited invasive species in Texas is illegal and punishable with a fine of up to $500 per violation. Boaters are also required to drain all water from their boat and onboard receptacles, including bait buckets, before leaving or approaching a body of fresh water.

For more information on how to properly clean, drain and dry boats and equipment, visit the TPWD YouTube channel for a short instructional video. To learn more about common and giant salvinia along with other invasive species in Texas, visit tpwd.texas.gov/landwater/stop-invasives/.

TPWD and partners monitor for invasive species in Texas lakes, but anyone who finds them in lakes where they haven’t been previously found, or who spots them on boats, trailers or equipment being moved should help prevent new introductions by reporting the sighting to TPWD at (409) 698-9121 ext. 235 or by emailing photos and location information to aquaticinvasives@tpwd.texas.gov.