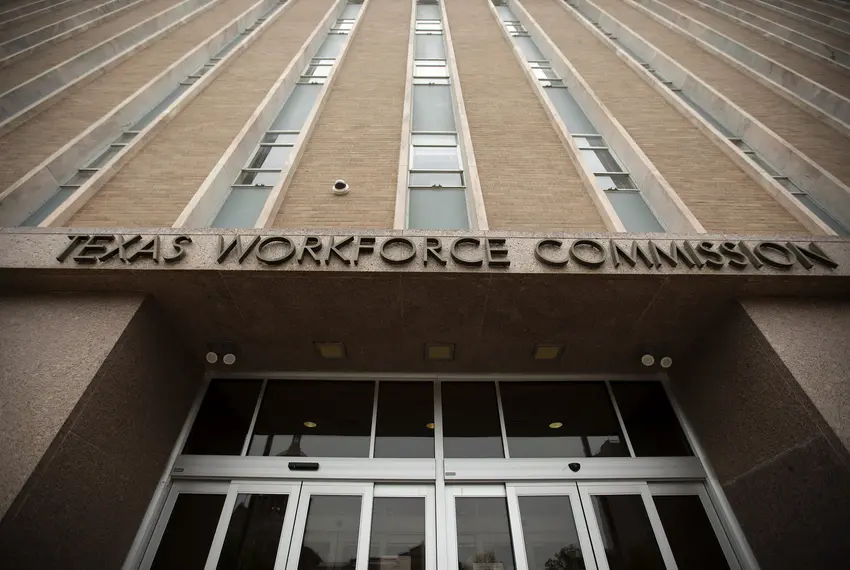 Mary Lou Ketchum, a substitute teacher in San Antonio, has been calling the Texas Workforce Commission for six weeks and still hasn’t been able to talk to a representative.

Ketchum, 59, filed a claim in early April and was denied, but she thought she’d be eligible for unemployment benefits under the federal coronavirus relief bill, which extends unemployment eligibility to part-time workers.

After appealing the decision, she said she is still waiting to hear back. She said the commission’s website is “primitive” and outdated. Pages load extremely slowly, and whenever she uses the backspace key, the system logs her out, she said.

“It definitely has put a strain on me,” Ketchum said. “I went to the food bank — I never thought I’d ever have to do that.”

The Texas Workforce Commission’s unemployment benefits services system — the online platform for one of the biggest elements of the state’s safety net for Texans affected by the pandemic — is on a mainframe computer system built in the early to mid-1990s, Ed Serna, the commission’s director, told The Texas Tribune. When the novel coronavirus brought much of the state economy to a standstill, the system experienced a surge of unemployment claims it has struggled to handle.

Now the agency is working to process the nearly 2 million unemployment claims filed in the past two months through a system running on outdated technology and code. And when Texans try to call the commission’s phone lines to file claims or seek answers, they run into busy signals or automated messages saying the agency is unable to take their calls. On April 7, the Texas Workforce Commission received 3.5 million calls, 3.1 million of which received busy signals.

“They should move all their servers to a public cloud,” Turner said. “They should have done it before.”

The Workforce Commission’s unemployment system is federally funded, and in 2019, the agency had finally lined up enough federal money to replace the system and move it to the cloud. But the pandemic struck before that update — which will take two or three years — could be launched, Serna said.

“On the mainframe side, we’ve increased the processing capacity … pretty much as much as we can,” Serna said. “If that were cloud-based, it would just scale to our needs.”

Steven Parker, a welder in North Richland Hills, was one of the nearly 2 million Texans who filed for unemployment because of the pandemic.

Parker, 39, had already exhausted his 26 weeks of benefits in January after losing a job in August. He started a new job, only to lose that one as well in early April. Under the federal Pandemic Unemployment Emergency Compensation program, Parker was eligible for an additional 13 weeks of benefits, and the Workforce Commission approved his claim in April.

But more than a month later, Parker said he still hasn’t received any payments, and he can’t get through on the phone lines to ask what’s holding up the money. He’s getting desperate — he said he has burned through his savings and will run out of money before the end of the month.

“I just need something to keep things going, to put some gas in my car and food in my fridge,” Parker said. “You know it’s bad when you have to unplug your freezer.”

The Texas Workforce Commission oversees workforce development, offering job training for Texans seeking employment and guidance for employers on running their businesses. And for out-of-work Texans, the agency processes unemployment claims and payments through its unemployment insurance system, which it built from the ground up in the 1990s because nothing like it was available from private vendors, Serna said.

Lawmakers, concerned about security and the inefficiency of having each state agency run its own IT operation, passed a bill in 2005 that required state agencies to use the state’s hardware and store their software in the state’s two data centers — one in Austin and the other in San Angelo. Even after the Department of Information Resources, which manages the data centers, started offering cloud services in the mid-2010s, it managed those services internally.

The Workforce Commission moved its main website over to the cloud, but because the unemployment system is not compatible with the cloud, the system remained on the state’s mainframes.

And when hundreds of thousands of Texans rushed to file for unemployment, those mainframes couldn’t handle the crushing demand.

At the start of the pandemic, the online application for Texans to apply for benefits operated on just five servers, Serna said. The commission quadrupled the number of servers as quickly as possible, but that’s about as much expansion as the mainframe system can handle, Serna said.

Many companies and government agencies across the nation have shifted their software to cloud hosting, which can more easily increase or decrease how much computing power is available to meet changing demand.

In March, Massachusetts Gov. Charlie Baker said shifting the state’s unemployment platform to Amazon Web Services’ cloud a year ago helped it process a similar crush of unemployment claims. And federal agencies including the CIA run on Amazon’s cloud.

State Rep. Donna Howard, D-Austin, a member of the House Appropriations Committee, said state agencies tell the committee year after year that they need to upgrade their IT systems. Since the pandemic hit, she said, Texans have contacted her to voice their frustrations with the unemployment claims system.

“I have heard time and time again about people who have tried to file that keep being bumped off and keep being told to [call the agency directly],” Howard said. “I would hope that if we had everything on the cloud, we would not be having as much of a backlog, as much frustration, as much inability to process those that are trying to access [the Texas Workforce Commission] to file claims.”

Disrupted plans for a new system

Even before the pandemic, the Workforce Commission had set aside federal funding and received permission from the state Legislature last year to spend up to $40 million on overhauling the old unemployment system.

“The new system will be cloud-based so that it can be scalable during an emergency,” Serna said. But it will still be managed by the Department of Information Resources.

The Workforce Commission was close to choosing a bidder to upgrade the unemployment benefits services system when the pandemic hit, Serna said. Once the agency accepts an offer, Serna said it’ll take two to three years to get the new system online.

The commission might have been able to develop a new system earlier if adequate federal funding was available, Serna said.

“There really hasn’t been an effort from the federal government to look at the 50 states and its territories and say, ‘OK, we’re going to allocate a large amount of money to all the states to modernize their systems,” Serna said.

Meanwhile, Ketchum, the San Antonio substitute teacher, is still waiting to see if she’ll be able to receive unemployment benefits. Her sister has been supporting her financially so she can get by.

If Ketchum’s appeal is denied, she said she’ll have to start looking for a new job. But she said she’s afraid of exposing herself to the novel coronavirus.

“I have asthma and bronchitis and high blood pressure,” Ketchum said. “One time I feel like I should look for any job, and another time I think I should stay at home and play it safe. That really worries me.”

Daily Devotional from The Way Bible Church for May 19th, 2020