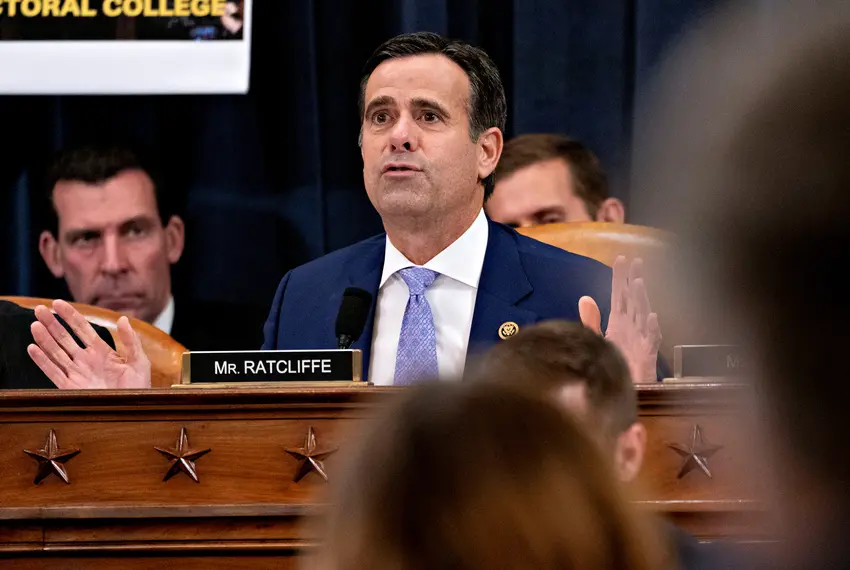 In his confirmation hearing Tuesday for director of national intelligence, U.S. Rep. John Ratcliffe, Hopkins County’s representative in Congress, gave two key guidelines for how he would carry out his job: One, he would always follow the law. Two, the information he would provide to the president, Congress and policymakers would be “unvarnished” and unaffected by improper outside influence.

Ratcliffe, who has represented his northeast Texas district in the U.S. House since 2015, was appearing before the Senate Intelligence Committee less than three months after President Donald Trump nominated him to the position, which oversees 17 intelligence agencies.

Trump first said he would appoint Ratcliffe to the position last year, but Ratcliffe withdrew from consideration amid claims that he’d exaggerated parts of his biography, like his role as the leader of an immigration crackdown while he was a federal prosecutor in the Eastern District of Texas.

Ratcliffe defended his record at the time, and Trump formally nominated him in February.

The public portion of the committee hearing was brief, lasting under three hours, and conducted with rigorous social distancing guidelines. It will continue in a private session in the afternoon. The committee’s chairman, U.S. Sen. Richard Burr, a Republican from North Carolina, said he wanted a speedy vote on the nomination. Ratcliffe’s resume was not a major point of discussion.

In his opening remarks, Ratcliffe told the committee he was compelled to public service after 9/11. He said his goal is to provide “objective and timely intelligence” as the president’s principal intelligence adviser and in his dealings with Congress.

A key area of initial focus, Ratcliffe said, would be wrestling with the geopolitical and economic impacts of COVID-19 and its origins.

Election security, namely Russian election interference, was also a prominent topic during the hearing. Ratcliffe stated Russia used “active measures” to interfere in the 2016 and 2018 elections and was actively working to do so in 2020. He said that Russia failed to change any votes or influence the election in 2016, and committed to bringing information on foreign election interference to Congress.

The line of questioning reflected the political reality of the time. Trump has been a frequent critic of the nation’s intelligence community. He has also repeatedly referred to allegations of Russian election interference as a “hoax.” Last year, defending his decision to nominate Ratcliffe, Trump said intelligence agencies had “run amok.”

Acting Director of National Intelligence Richard Grennell, appointed by Trump last year, has had a combative relationship with the committee, whose leadership has been concerned about personnel shifts purported to have happened at the director’s office.

Senators repeatedly asked about the Worldwide Threat Assessment, an annual report that was to be delivered to the House Intelligence Committee in February that never arrived, with little explanation. They pressed Ratcliffe on whether he would release the report quickly; he indicated he would. The document, TIME reported, warns that the United States was not ready for a global pandemic.

Senator Angus King, I-Maine, asked Ratcliffe if he would appear to testify to Congress if asked not to by the White House. Ratcliffe said yes. Sen. Martin Heinrich, D-New Mexico, asked Ratcliffe if he believed a “deep state” was in operation, referencing the president’s claims that civil service bureaucrats were standing in the way of his policy objectives.

Heinrich then questioned Ratcliffe on whether he had pledged “loyalty” to the president or would emphasize the president’s priorities over national security concerns.

“Keeping politics out of the intelligence community is one of my priorities,” Ratcliffe said.

When pressed on his thoughts on issues, however, Ratcliffe often demurred, saying he would execute law and policy as written, but that the position he was nominated for was not a policymaking one.

Sen. John Cornyn, R-Texas, served as one of Ratcliffe’s boosters during the hearing, introducing him to the committee in lieu of former U.S. Attorney General John Ashcroft, who was initially scheduled to introduce the nominee. Instead, Cornyn delivered his own remarks interspersed with endorsements read aloud from a letter from Ashcroft.

Cornyn said he’d known Ratcliffe personally for 10 years and gave his personal recommendation before questioning started. He said Ratcliffe understood the gravity of the security concerns the U.S. faces and that he trusts Ratcliffe to be a competent leader and transparent communicator with Congress.

Ratcliffe’s hearing came under unique circumstances. In addition to the tension felt between the committee and the White House, the hearing reflected a new, socially-distanced reality. The Senate, after returning to the Capitol under new social distancing guidelines, is carrying out its duties in new ways.

Much was missing. Chairs normally filled by members of the public, the press and the nominee’s family were absent. Committee members’ seats on the dais were mostly empty. Members of the media were limited to a pool representing the media at large. Ratcliffe sat alone at a long table draped in black cloth.

The hearing was broken out into 30-minute blocks, at the end of which was a hard cutoff for senators’ questions. Committee members observed from their offices and submitted questions electronically. When it was their turn, senators appeared in the chamber, took their seats and addressed Ratcliffe. Between those blocks, Burr and Vice Chairman Mark Warner, a Democrat from Virginia, questioned Ratcliffe further.