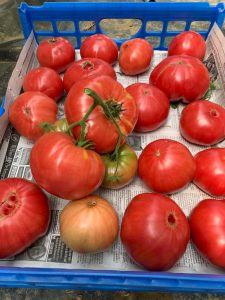 When it comes to understanding and distinguishing the difference between heirloom plants, the lines may be a bit blurry to the home gardener.

If you’re part of the baby boomer generation, your grandparents, and probably your parents grew heirloom vegetables almost exclusively. Most heirloom seeds have been handed down from generation to generation — most regions of the country. They were hand-picked by gardeners for a special trait — perhaps the specific taste of a tomato, or the hardiness of a squash plant. Some may have been developed by a university when commercial breeding of vegetables was just beginning — at least a half century ago. Some heirloom varieties are centuries old.

The most descriptive aspect of heirloom plants is that they are all open pollinated, which means they are pollinated by wind or insects and no human intervention is needed. Also, the characteristics of heirlooms tend to remain stable from one year to the next.

There seems to be general agreement among gardeners that heirloom varieties taste better than hybrids or GMOs. However, heirlooms are known for certain inconsistencies. The harvest time may be unpredictable, and the size of the fruit can vary widely.

Since heirlooms were generally used for home consumption, gardeners grew them for flavor. However, with increasing U.S. population after World War II, commercial growers began looking for consistencies in harvest time, size, amount of production, ship ability and color of vegetables and other plants.

Plant breeders create hybrids when they intentionally cross-pollinate two different varieties of a plant, hoping to create a new hybrid variety that contains the best traits of both parent varieties. Although hybrids are often confused with genetically modified organisms, there is a significant difference.

Of course, cross-pollination takes place naturally as well but when hybridizing, growers carefully control the pollination to make sure that the traits they are looking for occur with the offspring. Traits they may be looking for are resistance to disease, insect or fungal infections, and bigger or more uniform size. Creating the right hybrid takes many long years of experimentation and recording of traits.

The Juliet (Roma) tomato is an example of a hybrid tomato. So is Sun Gold, a yellow cherry tomato.

Some of the good traits of hybrids are: dependability in size and color, uniformity in color and flavor, better disease resistance, higher yield and less care required.

These are plants (or animals) whose genes have been changed using genetic engineering processes. Scientists use genetically modified organisms to produce medicines and foods.

In plants, scientists have been  transferring genes for years now. Genes have been transferred within the same species, a cross species and even across kingdoms. GMOs are also being used in the research and production of pharmaceutical drugs, experimental medicine and, of course, in plants.

There are many GMO crops and many GMO seeds available. Some of the commercial vegetables and food we eat have been genetically modified. The idea behind GMO engineering is to produce a trait in a plant that does not occur naturally in the species.

In plants, GMO species are bred to create resistance to pests, diseases, environmental conditions. It can also help in reducing the amount of large amounts of the food product spoiling that occurs during long transportation. Genetic engineering of plants can also make them resistant to herbicides.

GMOs however, cannot exist without laboratory manipulation. When choosing what types of plants to use in your garden, it might be best to stick with the tried and true — the heirlooms and hybrids. Although there has been a big push by large agricultural corporations such as Monsanto to advance the science of GMOs, there has been a strong resistance from independent farmers to use GMO seed, with many questioning the efficacy of genetic manipulation.