Gov. Greg Abbott says reopening the Texas economy will be a slow process 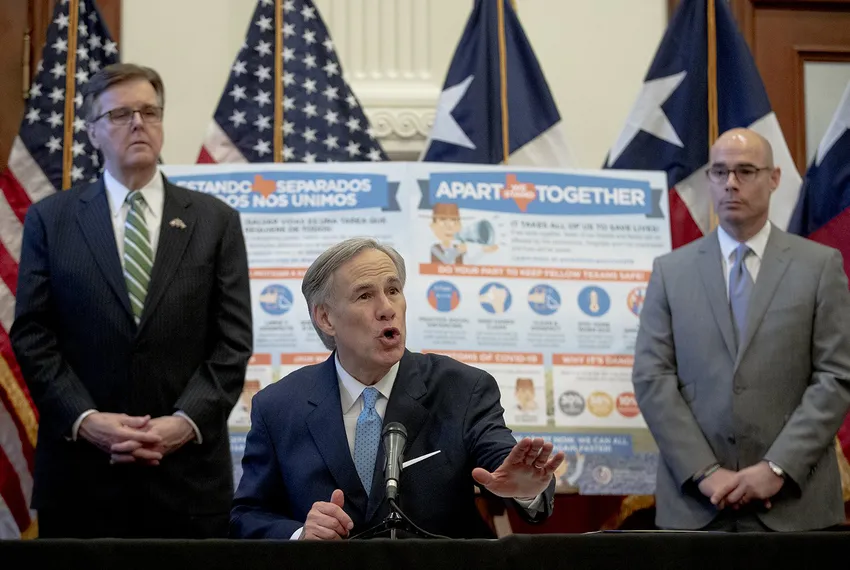 Gov. Greg Abbott said Monday that reopening the Texas economy will be a “slow process” guided by public health concerns as he continued to preview a forthcoming executive order that will detail his strategy to reignite business in the state.

Abbott, who first hinted at his plans during a news conference Friday, said he’ll outline them later this week. Asked for more details Monday, he indicated his announcement will include a “comprehensive team” that he said will “evaluate what must be done for Texas to open back up, ensuring what we are doing is consistent with data, with medical analysis, as well as strategies about which type of businesses will be able to open up.”

“This is not gonna be a rush-the-gates, everybody-is-able-to-suddenly-reopen-all-at-once” situation, Abbott said during a news conference at the Texas Capitol in Austin where he announced $50 million in loans to small businesses suffering under the pandemic.

Abbott also told reporters to expect an announcement this week on whether schools will remain closed for the rest of the school year. Abbott previously ordered them closed until May 4.

The governor gave his latest news conference as the total of coronavirus cases in Texas hit at least 13,906, with 287 deaths, according to the latest numbers from the Texas Department of State Health Services. Out of Texas’ 254 counties, 178 are reporting cases.

The virus continues to spread, but Abbott and other state officials coordinating the response have struck a more optimistic tone in recent days, noting the declining rate at which the number of Texas cases is doubling. On Monday, Abbott called trends like that “glimmers of hope with a bunch of red flags attached.”

The number of tests done in Texas stands at 133,226, according to the DSHS figures. That remains an alarmingly low number to many given Texas’ massive population of nearly 29 million people.

As he did Friday, Abbott said Monday that testing will be part of his announcement later this week on reopening the economy.

“We will ensure that a component of that will include adequate testing,” Abbott said, adding that he just had an hourlong conference call with Vice President Mike Pence and Deborah Birx, the White House coronavirus response coordinator, about the testing necessary to “safely reopen the state for doing business.”

Abbott’s news conference came a day after President Donald Trump urged states to get their testing capabilities “perfected” — and hours after Trump declared on Twitter that he has power over governors when it comes to restoring state economies. Abbott did not directly address either Trump pronouncement but said he is in “constant contact” with the White House and is well informed of its plans along with other governors.

Abbott was joined at his Monday news conference by executives from Goldman Sachs and LiftFund to announce the loans to small businesses affected by the coronavirus. The loans were made available by a federal program recently created to help small employers get through the pandemic.

Abbott’s office said the loans “will primarily be used for payroll so that employees can continue to receive paychecks and small businesses can retain their employees and will be partially or wholly forgiven.”

Daily Devotional from The Way Bible Church for April 14th, 2020