Home Local News How many coronavirus cases in Texas? Depends on who you ask.
Local NewsTexas News 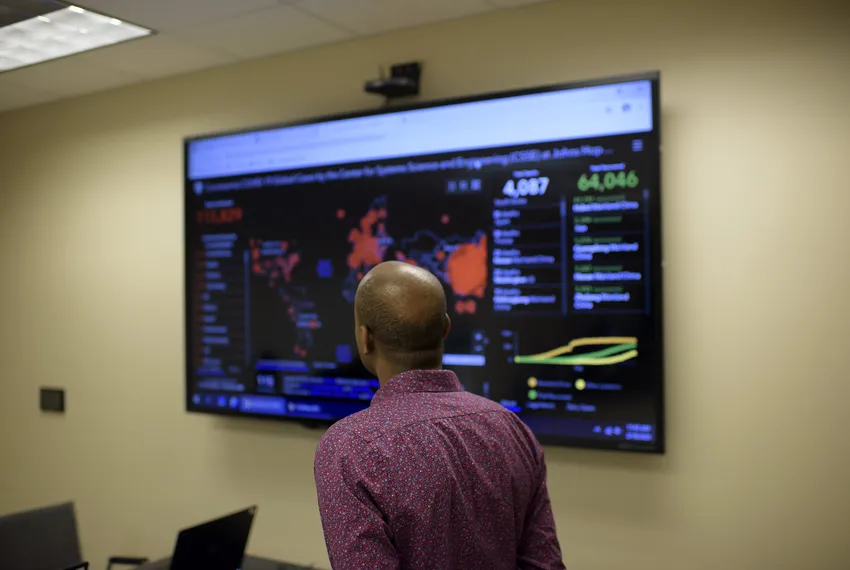 A map at a Texas city’s call center for coronavirus concerns shows confirmed cases around the world. Photo credit: Mark Felix for The Texas Tribune

How many cases of COVID-19 are there in Texas? It depends who you ask.

On Tuesday, the answers varied wildly.

Gov. Greg Abbott said at a press conference that 715 people have tested positive for the new coronavirus so far. At the same time, the Texas health services department — which reports the state’s official count every day — showed only 410 people. (Later in the evening, the number was revised to match Abbott’s statements.)

Johns Hopkins University, which is tallying cases worldwide, reported 857 cases in Texas as Abbott gave his remarks. And the U.S. Centers for Disease Control and Prevention’s count tallied 507 cases in Texas in the morning but dropped the number to 352 by the afternoon.

Depending on which number you use, Texas is ranked either 10th in the nation for most cases or 21st.

The discrepancies have only been worse at the county level. Texas health officials reported 34 cases in Dallas County on Tuesday morning. Meanwhile, the county reported 169 cases among its residents. (The state updated the Dallas cases to 131 on Tuesday evening.)

Gov. Greg Abbott, in public addresses Tuesday and this weekend, had to reconcile that the state’s numbers were dramatically lower than those in other reports. In his update, he used numbers reported by the state and offered up a count from Johns Hopkins.

The Texas Department of State Health Services acknowledged the massive reporting discrepancies to The Texas Tribune this week and launched a new reporting system Tuesday evening that officials believe will close some of the gap. The updated page came with a note that more than 300 previously unaccounted-for cases were now being reflected in state data.

But public health experts have said that even the most generous accounting of positive cases in the state is a dramatic undercount given the rampant evidence of community spread, combined with the state health department’s traditionally lengthy reporting process and limited testing capacity.

Experts have also emphasized the importance of ramping up testing in Texas and across the country, warning about the dangers of decision-making based on inconsistent numbers and incomplete data.

Abbott has signaled to Texans that the case numbers are informing some decisions. This weekend, he stopped short of calling for a statewide lockdown over the coronavirus, saying there are still many counties in Texas without any cases. As he made those statements Sunday, some counties were collectively reporting hundreds of cases that the state was not including in its official count.

“I am governor of 254 counties in the state of Texas,” Abbott said at a press conference Sunday. “What may be right for places like the large, urban areas may not be right at this particular point in time” for the counties that he said have no cases of COVID-19, the disease caused by the new coronavirus.

Cases reported by some rural counties show that it’s not just large, urban areas being hit by the virus. In small-town East Texas, local health authorities have reported one case apiece in Cass, Van Zandt and Morris counties as of Tuesday. The state reported none until Tuesday evening, when DSHS released its new reporting system.

One reason for the previous discrepancies between state and county numbers was that different methodologies were being used.

Until Tuesday evening, the state tracked cases by county of residence. This meant that if a University of Texas student who lived in Houston contracted the new coronavirus and was tested and treated in Austin, the tally appeared as a positive case in Harris County.

Many counties, on the other hand, have been reporting anyone who tested positive in their jurisdictions. DSHS’s new method will use tallies directly from counties.

DSHS spokesperson Chris Van Deusen told The Texas Tribune that the new state reporting system will “better reflect what local jurisdictions are reflecting” and “have a complete picture as possible.”

“In order to make sure we’re providing the most up-to-date information possible, we’re shifting to using the COVID-19 case counts that local jurisdictions are reporting publicly,” Van Deusen said. “Previously, we were relying on the official case forms we receive from local health departments and our regional offices. But those come in later than the public updates, so it created confusion about the numbers.”

Other reasons for discrepancies center around who gets counted. Texas officials have made conflicting statements about whether the state’s count included so-called “presumptive positive” tests — which are cases not confirmed by the CDC. The state also doesn’t generally count coronavirus patients housed at the federal quarantine site in San Antonio.

Now that DSHS is including all cases reported publicly by local health departments, the agency says lingering discrepancies are possibly the result of other sources counting some cases more than once.

Dennis Perrotta, a former Texas state epidemiologist, said Texans should look to their local health authorities for the best data.

“First of all, always, a local health department is the place where they know more about what’s going on in their community,” Perrotta said, adding that he was not surprised by the disparities between local and state numbers because of the complex reporting process.

With community spread of the virus happening in several Texas counties, more people who have contracted the virus likely haven’t been tested. And Texas is lagging behind other large states in testing capacity. According to a Washington Post report, “New York has processed seven times as many tests as Texas,” although Texas has over 9 million more residents.

Some experts say the virus has spread past the point when testing would have made a difference; sick people need to go to the hospital, and people not showing symptoms need to stay home.

While larger, urban counties may have the testing resources to understand the scope of the virus in their areas, small communities are not there yet, Perrotta said.

“There’s still pressure on parts of Texas to try to understand what’s going on in their community so they know whether or not they should just continue to work on identifying cases and tracking down their contacts or … consider everybody as having it,” Perrotta said. “Some places are ready to move forward and not worry about testing, but others are trying to make sure their efforts match the threat.”