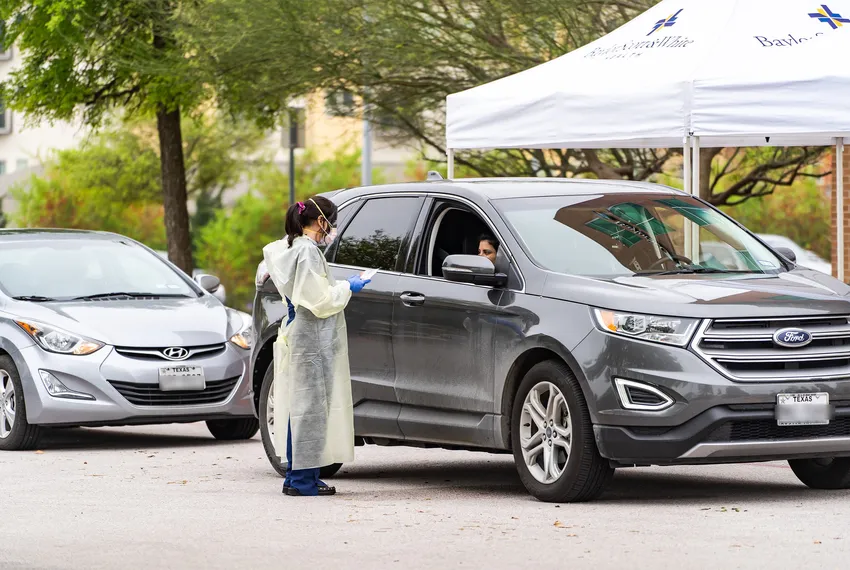 Gov. Greg Abbott is promising that the state will dramatically ramp up coronavirus testing, but as of Monday night, there were still no concrete figures about how many have been tested so far — and there was no shortage of complaints from Texans who can’t get one.

So far, public and federal labs have tested only 439 people for the virus, according to figures released late Monday by the Texas Department of State Health Services. That does not include “hundreds” more tests conducted by private labs, officials said. That presumably leaves the number somewhere north of 700 people, but The Texas Tribune could not pin down officials on a precise count.

Meanwhile, sick patients like Patrick Parker, a University of Texas research assistant, are still being turned away. Parker said he tried in vain Sunday to get a test at a drive-in center run by Baylor Scott & White Hospital in North Austin. He lost $40 — and a little bit of faith in response efforts for the new coronavirus — in the process. Other Texans exhibiting symptoms told similar stories in interviews with the Tribune, but not all wanted to be identified.

Parker said Monday he’s been sick for 12 days with what appear to be COVID-19 symptoms — fever, sore throat, shortness of breath and “respiratory distress and pain.” He said he was “embarrassed to say” that he was moving around in public for the first week of his illness, and then he self-quarantined after realizing the disease was spreading in Austin.

He said he was denied in the online prescreening process by Baylor Scott & White.

“It seems like they are only testing people who are very sick or who have just traveled from high-risk areas. I show the primary symptoms of COVID, but I can’t figure out how to get tested,” he said. “In order for us to get a handle on this so we’re not just stumbling in the dark, we need mass testing.“

Something resembling mass testing is what Abbott vowed would be happening by the end of the week in Texas — about 10,000 per week. That would dwarf what’s happened so far and put Texas closer to similarly sized states that have already conducted thousands of tests, according to data compiled by a national consortium of journalists.

Figures provided by DSHS, together with statistics gathered by The COVID Tracking Project, appear to put Texas, the second most populous state, toward the bottom of the top five states, depending on which figures for Texas are used. As of late Monday, California had tested at least 8,300 people; New York had tested 7,200; Florida had tested 1,300; and Illinois had tested 1,025, figures show.

Where Texas ultimately lands on the testing spectrum won’t be clear until the dust settles a bit on all the fast-moving coronavirus developments and the reporting of data from states improves. Nationwide, the Trump administration said, almost 2 million tests would be available to some 2,000 labs by the end of this week.

Officials at Baylor Scott & White Hospital, now operating at least two privately run drive-through testing centers in Central Texas, would not say Monday how many tests it had conducted, though Abbott spokesman John Wittman confirmed Monday that the hospital’s testing numbers were not included in the state’s official count.

Wittman said it’s impossible to compare Texas with other states like California, where community spread of the virus was reported sooner. That’s “apples and oranges,” Wittman said.

At a press event in San Antonio, Abbott said that by the end of this week, “everyone who needs a COVID-19 test will be able to get a COVID-19 test.” But what qualifies as “need” is something governments and medical professionals working together will have to determine.

“The fact is not everyone needs one. Just because you may be concerned, ‘Oh, I may have COVID-19,’ doesn’t mean you’re going to qualify,” Abbott said. “You can’t just drive up like you would drive up to a Whataburger and order a cheeseburger –– you can’t drive up to this and order a COVID-19 test.”

In San Antonio, where the state’s first drive-through facility opened Friday, only first responders and health care workers who meet the city’s criteria can be tested.

The testing is not open to the general public, including those who are at higher risk of contracting the infection, like Louise Day, a 74-year-old retiree who has emphysema.

Day said she is not experiencing any COVID-19 symptoms, but due to her age and lung condition, she wants to know what her options are in case she takes a turn for the worse.

Day recently called the city’s public health department and was frustrated to learn she did not qualify for the drive-through testing, she said.

In nearby Boerne, Debbie Van Scyoc, 68, spent Monday frantically trying to have a test administered after she was unexpectedly sent home from her job at a long-term care facility with instructions to not return until she had two negative test results. The facility has a large number of potentially vulnerable elderly people.

She had no symptoms, but a supervisor said she was “exposed” to the virus because she visited her husband — who had a heart attack last Wednesday, she said — in San Antonio Methodist Hospital, which has a coronavirus patient in isolation, according to news reports.

She described a Kafka-esque process to try to get a test. Her local doctor referred her to the Kendall County Health Department, which referred her to Bexar County, where officials said anyone without symptoms could not be tested.

Then she tried to get information about the drive-through facility for first responders and health care providers, only to be told by a San Antonio hospital, “‘We can’t tell you where that is.”’

Marjorie Dorrow, chief operating officer for the company that owns the facility, said it will pay Van Scyoc for any days of work she’ll miss, “as we have done with other associates previously.”

“Cibolo Creek [the facility] is responsible for the care of our most fragile elderly, the population that is at the highest risk for contracting COVID-19,” Dorrow said. “While these are certainly unprecedented times, we take our responsibility very seriously and will always err on the side of caution.”

Some who have attempted to get tested reached their goal after more than one try. An asthmatic school teacher in the Austin area who reached out to the Tribune via social media said she was turned down for a test at an emergency room Saturday despite having many of the symptoms — including fever, cough and difficulty breathing.

But the 57-year-old got one Sunday from a Baylor Scott & White facility near The Domain in North Austin.

She was notified Monday night that the test came back negative — which she took as both good news and bad news.

“With my immune system already compromised,” she said, “it would have been nice to just say, OK, I had that already.”

Retail employee Eva Rovin, 42, got tested at the same drive-through Sunday after waking up with COVID-19 symptoms.

Rovin said she had initially called the city’s information line, who directed her to the Centers for Disease Control and Prevention website. She was told to see her doctor, but she doesn’t have one, and she can’t afford health insurance, she said. A call to urgent care led her to the Baylor Scott & White website. But she said the site was glitchy, and she was unable to complete the questionnaire.

“At that point, I almost gave up out of hopeless frustration, but decided to just drive to the testing site and ask for help,” Rovin said in a text message — she said her throat hurt too badly to speak over the phone. “That worked, because once the staff realized the questionnaire wasn’t working, they simply asked me the questions in person, and deemed my symptoms enough for a test, so I waited in a line of cars for two hours, and got tested right from my car.”

The swab test itself took about two minutes, but it “hurt like heck,” Rovin said. She was not charged yesterday but is expecting to be billed $40, she said. She may not have to pay for the questionnaire; in a Monday press release, Baylor Scott & White said it is now offering the screening for free to anyone fearing infection.

Rovin expects to get her results back in three days.

By Monday, Baylor Scott & White — without explanation — had closed down that North Austin location and shifted testing to two other sites, in Southwest Austin and in Round Rock.

The Southwest Austin clinic, in contrast to North Austin’s, was tucked away from the main road and only had a few cars in line Monday afternoon.

Daily Devotional from The Way Bible Church for March 17th, 2020