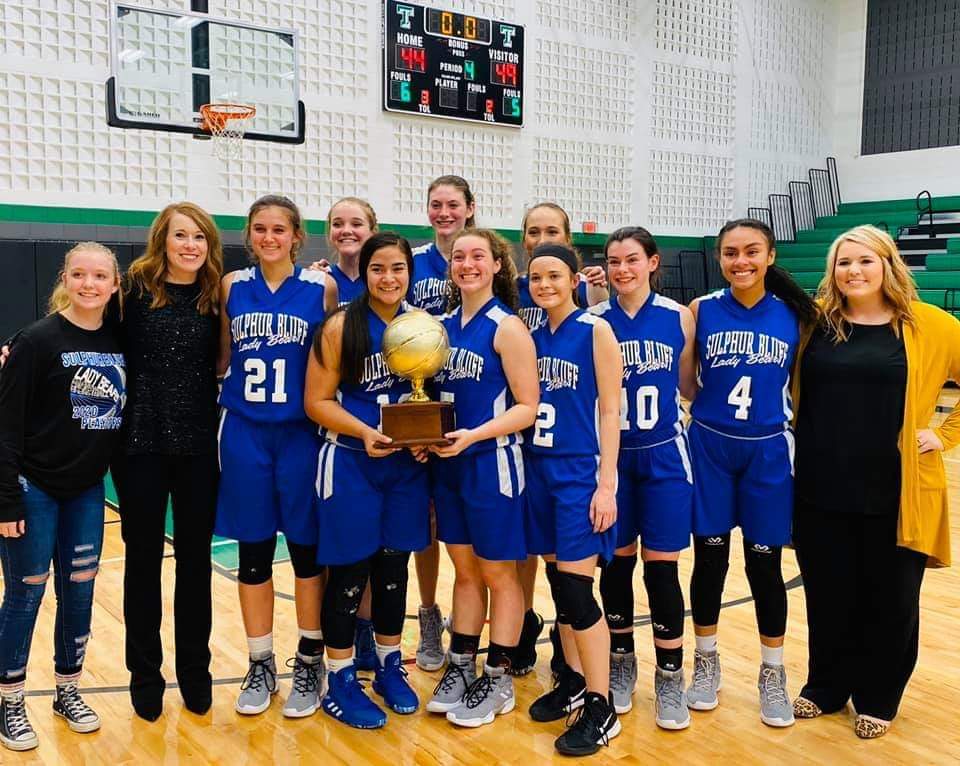 Sulphur Bluff Girls Basketball played Bryson Friday night in Tioga and won their Area round matchup 49-44. Their record on the season is now 23-12.

The Lady Bears have not made it to the Regional Quarterfinals round since Coach Tim Lane took them in 2003-2004. Coach Zandra Peyton said, “That was my senior year at the Bluff. It’s neat to get to be a part of it again. The girls played a great game. They definitely had some nerves the first half of the game, but came back out at halftime with confidence. We have really great upperclassman who have set an example for the younger girls in our program. The girls have so much heart and talent. I am blessed to be their coach and am proud of the many accomplishments they have had this season. The community has really supported the athletes. It’s great to look up in the stands and see  so much love for the student athletes throughout the year.”

Coach Peyton reported that, “Freshman Skylar Stanley had a great game and really helped her team both offensively and defensively she had 18 points, 9 rebounds, and 2 steals. Senior Ann Dorner did a great job handling the ball and had 10 points,3 rebounds, 1 assist, and 3 steals. Jada Wade had 9 points, 1 steal, 5 assists and 4 rebounds. She has really made a big impact on defense, she is making it harder for their key players to score and really reads the floor well. Alley Collet had 7 points, 1 assist and 7 rebounds. She was very versatile and played in a post position and a guard. Dalena di Donato played great help defense and had 2 points,1 steal, and 5 rebounds.Bailey Neal had 2 points, 2 steals, and 1 rebound. Angel Brown had 2 points and 2 rebounds,and 2 assists.Tori Raine had 3 rebounds. and Lydia Drummond and 1 steal.”

Sulphur Bluff will face number 2 ranked Dodd City tonight in the Regional Quarterfinals Round at 6:00pm at Chisum. The Sulphur Bluff Boys team will also face Dodd City in their first round of playoffs and will play after the girls game with tip-off time at 7:30.

Daily Devotional for The Way Bible Church for February 24th, 2020