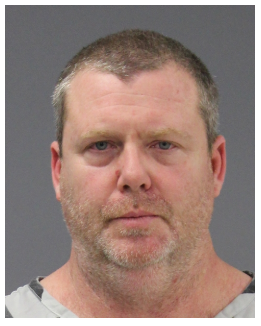 Hopkins County Sheriff’s Office arrested a 44 year old Sulphur Springs man yesterday for Aggravated Assault with a Deadly Weapon after he allegedly shot at his fiance’s step-sister during an argument.

HCSO responded to reports of a disturbance with possible shots fired at approximately 3:30 pm yesterday. Communications advised deputies while en route that the caller stated that her fiance, Samuel Patrick Bryant, had shot at an intruder that was her step-sister.

The caller and her husband told deputies on scene that the step-sister broke into their residence and confronted them which caused them to be in fear for their lives.

Bryant claimed she grabbed a gun sitting on the couch and that the gun went off during a struggle over the gun. He then later claimed the gun went off when he dropped it. A recording of the 911 call showed that the caller stated that Bryant had shot into the floor to scare the intruder away.

After further investigation, evidence and statements showed that Bryant shot into the floor at the victim’s feet as an intimidation method while his fiance and the victim were arguing. It was found that the victim did not enter the residence with force, the door was wide open and that she announced herself prior to entering.

Bryant was taken into custody and transported to Hopkins County Jail for Aggravated Assault with a Deadly Weapon.