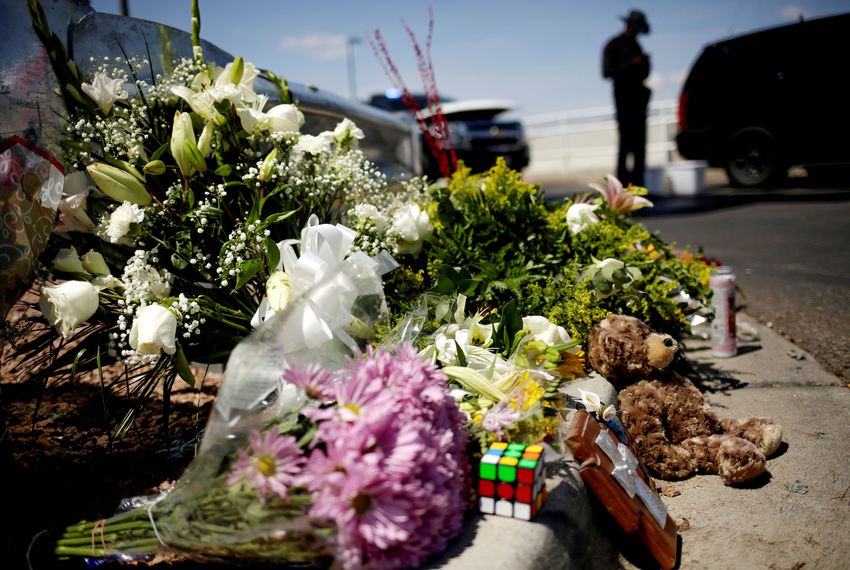 A shrine near the El Paso Walmart memorializes the 20 people who lost their lives to a mass murderer. REUTERS

EL PASO — The man accused of killing 22 people during a mass shooting at a Walmart store in the border city last summer has been charged with nearly 100 federal crimes, John Bash, the U.S. attorney for the Western District of Texas, announced Thursday.

He is charged federally with 22 counts of hate crimes resulting in death, 23 involving an attempt to kill and 45 charges of firing a weapon in relation to the hate crimes, according to an indictment of Crusius. The U.S. attorney’s office said that upon conviction, prosecutors will seek either the death penalty or life in prison.

Crusius allegedly published a manifesto in which he indicated the crime was motivated by hatred toward Hispanic Americans and immigrants. He also told authorities after he was arrested that he drove 10 hours from his home in Allen to kill Mexicans and ward off what he said was an invasion. Eight of the victims were Mexican nationals.

“On the morning after the attack, I explained that this horrific crime met the federal definition of domestic terrorism — it was an attempt to intimidate or coerce a civilian population,” Bash said. “And I said that we would do at the Department of Justice what we always do with people who perpetuate terrorist attacks on this country — we would deliver swift and certain justice. Today marks a significant step in fulfilling that commitment.”

Crusius has since pleaded not guilty to the state charges, and Bash said the federal prosecution would run concurrently to the state’s. Crusius is scheduled to make his first appearance in federal court Wednesday, Bash said. The federal case differs from the state’s in that Texas prosecutors are pursuing only one charge that could lead to a death sentence. Bash said each of the federal charges of attempted murder or murder carries a maximum penalty of life in federal prison or death, respectively.

“Under our federal system of government, a person can be held liable for both federal and state crimes for the same act or set of acts,” Bash said.

In the days following the shooting, Mexican officials said they wanted to be a part of the investigation and be kept informed about its process because of the fact that Mexicans were targeted.

“I am not going to go into detail, but we have met with Mexican officials during the course of this investigation, and our goal is to keep them as informed as possible,” he said.

It’s unclear if the federal trial would take place in El Paso or whether Crusius and his attorneys would request a change of venue, as has been mentioned at the state level. Bash said those decisions would be up to the judge in the case.

The shooting has reignited the debate over gun control and whether people should have access to weapons that can cause such carnage. According to the indictment, Crusius bought a Romanian variant of the AK-47 online and also purchased 1,000 hollow point rounds.

The shooting has also caused Democratic lawmakers to draw attention to President Donald Trump’s rhetoric on immigration, which some lawmakers have said contributes to hate crimes against immigrants and Hispanics.

During her Spanish-language rebuttal to the president’s State of the Union speech Tuesday, U.S. Rep. Veronica Escobar, D-El Paso, made a direct correlation to Trump’s words and the shooting.

“On Aug. 3 of last year, El Paso suffered from the deadliest targeted attack against Latinos in American history. A domestic terrorist confessed to driving over 10 hours to target Mexicans and immigrants,” she said. “Just before he began his killing spree, he posted his views online and used hateful language like the very words used by President Trump to describe immigrants and Latinos. That day, the killer took 22 innocent lives, injured dozens and broke all of our hearts.”