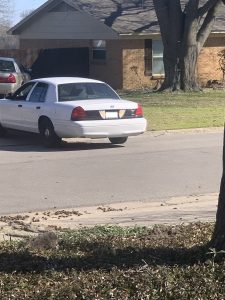 Photo of the subject’s vehicle

Sulphur Springs Police Department arrested a 56 year old Dallas man yesterday for Public Intoxication after receiving reports of him driving around the Lake Highlands neighborhood asking children to help him catch his dog and bring it to his vehicle.

Officers were dispatched to Jill Lane in Sulphur Springs in reference to reports of a man in a white Ford Crown Victoria driving around looking for a dog. He reportedly was asking kids in the neighborhood to catch the dog and bring it to his vehicle.

Officers located the vehicle on Lou Street and approached the subject. The subject stated he was was looking for his sister’s dog. Officers observed signs of intoxication including slurred speech, bloodshot eyes, and a strong smell of an alcoholic beverage.

The man was taken into custody for Public Intoxication and transported to Hopkins County Jail. We can not identify the subject due to this being a misdemeanor charge.