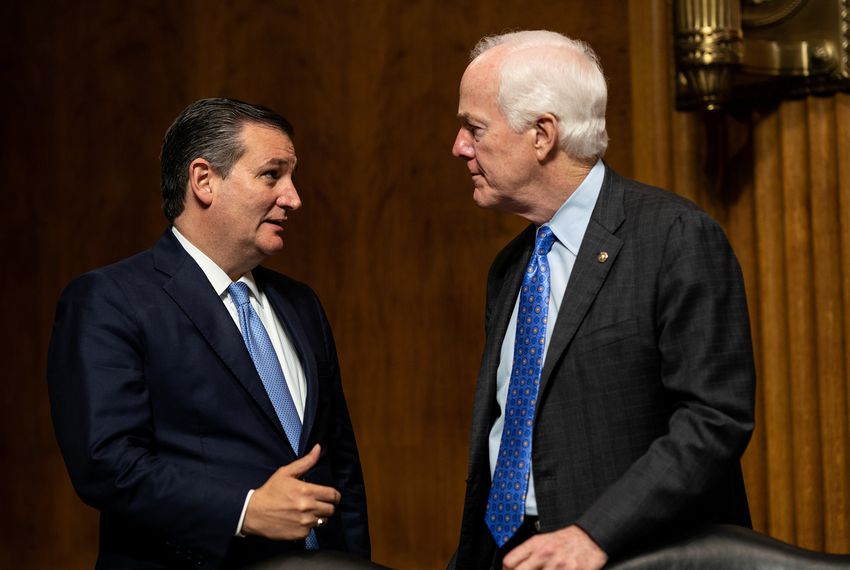 WASHINGTON — Texas’ two Republican senators, John Cornyn and Ted Cruz, voted with a majority of their chamber to acquit President Donald Trump of two articles of impeachment on Wednesday.

There was little doubt at the outset of the process that Trump would remain in office or that both senators would stick with their full-throated support of the president.

The tally fell far short of the two-thirds count needed to throw the president out of office, but the afternoon was not without drama. A few hours prior to the vote, U.S. Sen. Mitt Romney, R-Utah, delivered a stinging speech from the floor announcing his vote to convict the president.

Both Texans, who were each prominent lawyers before joining the Senate, served as jurors in a process with little past precedent to follow, and cloaked themselves with inscrutability as they listened to legal arguments over the president’s fate. But outside the chamber, they deployed their training to defend the president to the public and left little doubt where they stood on the matter.

House Democrats charged Trump in December with abuse of power and obstruction of Congress. The first charge was rooted in a series of testimony over the fall that alleged the president pressured Ukrainian leadership to investigate former Vice President Joe Biden and his son, Hunter Biden, in exchange for U.S. military aid that Congress had previously appropriated.

The second charge came about as the White House refused to allow a number of presidential advisers to testify before the House. Rather than litigate for months — if not years — over the enforcement of subpoenas, the House moved forward and sent the impeachment articles to the Senate in mid-January for trial.

Cornyn and Cruz similarly voted with nearly all of their GOP conference to oppose testimony from new witnesses before the Senate. And in the process, they served as fierce defenders of the president and his actions.

For Cornyn, the impeachment trial came as he gears up for his fourth U.S. Senate campaign. But it also served as a reminder for how closely he is aligned with Senate leadership.

His commentary was pointed. He frequently defended Republican positions on rules and taunted Democrats — mostly U.S. Senate Minority Leader Charles Schumer, House Speaker Nancy Pelosi and the senators running for president who were forced to stay in Washington amid the lead-up to the Iowa Democratic caucuses.

Cruz, once the bombastic black sheep within the Senate Republican conference, has spent the last year or so as a quieter presence around the halls of the Capitol. Chastened from a second-place finish to Trump in the 2016 GOP nomination fight and a shocking near-loss to former U.S. Rep. Beto O’Rourke, Cruz kept a lower profile of late at the U.S. Capitol.

But impeachment brought out the old Cruz. The intellectual swagger, the frequent trips to microphones to speak to reporters and, surprisingly, as the host of the top podcast in the country — a daily podcast on the proceedings that reached No. 1 on the iTunes charts. Democrats frequently underscored that the man Cruz so vigorously defended once insulted the appearance of Cruz’s wife and falsely accused his father of participating in the assassination of President John F. Kennedy.

U.S. Rep. Sylvia Garcia, D-Houston, was the Democrat with the most up-close view of how the state’s two senators handled themselves over the process. Day in, day out for nearly three weeks, she sat at the front of the chamber in her capacity as a House impeachment manager. Effectively a Trump prosecutor, it was her role to appeal to a chamber of Senate-jurors, including her home state senators.

Inside the room, both men were subdued. Cruz frequently scribbled on a legal pad and listened while leaning back in his desk chair toward the rear of the room. Cornyn sat close to the front in a nod to his seniority. He listened closely, often with a furrowed brow.

Garcia, a former municipal court judge, noted Cornyn’s past on the bench and described him as wearing a poker face that was the “same sort of demeanor and posture when he’s listening as I do.”

She found Cruz even more inscrutable.

“They both seem to be listening,” she added. “I’ve not seen them take a lot of notes. I’m hopeful that we can persuade one of them, but it’s doubtful.”

The state Democratic Party seized on the vote, with Cornyn’s reelection in mind.

“Throughout this entire impeachment process, complicit John Cornyn showed his true colors,” said Texas Democratic Party spokesman Abhi Raman. “Every opportunity he’s had to do his job and stand up for Texans and our Constitution, he’s instead stood for McConnell and Trump. Texans see right through John Cornyn and ready to send him home in November.”

The senators’ votes to acquit could prove to be among the most notable votes of their careers. Or, like every other extraordinary development of the Trump era, who did what during impeachment could fade into the background as the next drama takes hold.

Cruz will not face voters for another five years. Cornyn, however, is on the ballot in November. Most political handicappers project that he is a safe bet for reelection. But on the heels of Cruz’s close finish in 2018 and the overall political turbulence in the ether, even Cornyn cranked the alarm last year to his fellow Texas Republicans.

It’s an open debate among political operatives over whether impeachment will be a top issue in November.

At one point during a debate over rules, Cornyn urged his followers and Senate colleagues to litigate Trump’s removal in November rather than throw him out of office now.