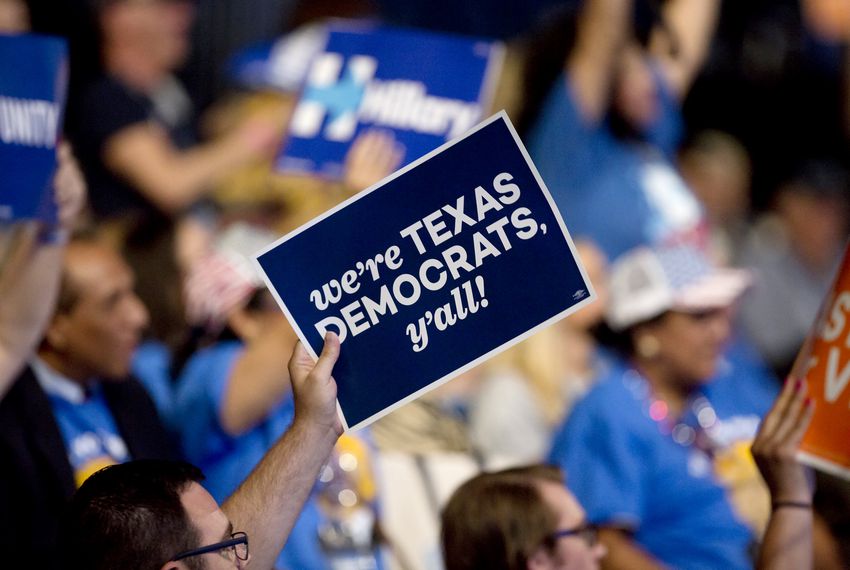 Texas Democratic Convention at the Alamodome on June 17th, 2016. Marjorie Kamys Cotera for The Texas Tribune

The race for the Democratic nomination for president officially got its start Monday night with the Iowa caucuses. New Hampshire, South Carolina and Nevada will soon follow. But Texas looms large over the next month. Its primary is on March 3 and it will award more delegates to Democratic presidential candidates than all of the primaries before Super Tuesday — combined.

The state will send 261 delegates to the Democratic National Convention from July 13-16 in Milwaukee. With one of the largest delegations and a large Hispanic population, experts say Texas could play a large role in selecting the nominee.

“I would say not only are the Texas primaries important, they’re probably, in many ways, more important than previous cycles … because of the incredibly crowded field,” said Rebecca Deen, chair of the political science department and associate professor at the University of Texas at Arlington. “We are also in on Super Tuesday with states like California, so that’s going to get a huge amount of attention.”

But, despite Texas Democrats finalizing plans in 2015 to revamp their complicated nominating process for presidential candidates in the primaries, the party’s process of allocating delegates still remains confusing to voters.

Here’s a rundown of what the third-largest Democratic delegation will consist of and how it will be selected:

What are the different types of delegates and how are they allocated?

During the March 3 primaries, Texans in both parties will vote to determine how pledged delegates in their party vote. While the Texas Republican party is expected to allocate all of the pledged district and statewide delegates to the candidate who receives the respective majority in the district and state in March, the Texas Democratic party determines its delegates more proportionally.

These 33 remaining delegates, formerly known as superdelegates, include 12 Democratic congressmen and 21 Democratic National Committee members. These unpledged delegates’ votes are not determined by the ballot box, so they can vote for any of the candidates. However, the national Democratic Party decided that these delegates can no longer vote on the first ballot at the convention starting in 2020.

How are the delegates selected?

First, local Democratic parties host county or senate district conventions during which they select delegates to the statewide party convention. At the Texas Democratic Convention in San Antonio in June, hundreds of Democrats will vote to select the district-level delegates for the candidate they support. Then, a committee will put together a list of 79 PLEOs and at-large delegates to finalize the rest of the delegation. Those delegates will go to the national convention.

When selecting the at-large delegates, the committee must also select people who meet the Texas Democrats’ affirmative action goals. The 261-person delegation must be perfectly split by gender and also needs to include a certain number of Hispanics, African Americans, Texans under 36, disabled Texans and other historically underrepresented groups.

“When you look at who identifies as Democrats in Texas, it is a large percentage of African Americans, and it is a large percentage of Latinos,” said Juan Carlos Huerta, professor of political science at Texas A&M University-Corpus Christi. “And so the idea is that, ’Hey, if these are the folks who are supporting the party, the party needs to reflect that when it sends a delegation to the (national) convention.’”

How does nominating the candidates at the national convention work?

A Democratic candidate needs support from at least 1,991 pledged delegates to win the nomination on the first ballot. If a clear winner doesn’t emerge after the first ballot, the 771 total automatic delegates can then cast a ballot for any of the candidates until one receives more than 2,375 votes. Voting keeps happening until a majority supports one candidate.

“If there are two that are really close to the threshold … expect that those people in third and fourth place are going to release their delegates so that they can go vote (for someone else),” said Glen Maxey, the special projects director at the Texas Democratic Party.

What makes Texas different from other states?

Instead, the party determines the number of “real Democrats” in each district based on the Democratic turnout in the previous gubernatorial and presidential race.

Daily Devotional from The Way Bible Church for February 4th, 2020

Texas power generation companies will have to better prepare for extreme weather under bills Gov....