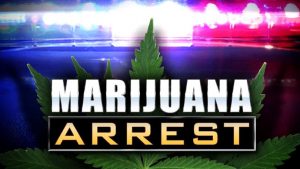 DPS arrested 31 year old Dallas Quincy Jackson of Arlington in Hopkins County on Saturday morning after discovering 44 pounds of marijuana in a Lyft vehicle that Jackson had hired to drive him from Little Rock, Arkansas to Arlington.

Jackson was the passenger of a vehicle stopped for a traffice violation on I-30 at the 129 mile marker. During contact with Jackson, he explained that he had hired a Lyft driver to drive him from Little Rock, Arkansas to Arlington.

Jackson told the DPS officer that he had not brought luggage with him but the Lyft driver stated that he had placed two large pieces of luggage in the trunk when he was picked up.

The officer asked Jackson if he had brought anything illegal with him and he admitted that there was marijuana in the trunk. A probable cause search of the vehicle discovered 38 vacuum sealed bags of marijuana totaling 44 pounds. A water bottle containing a purple liquid believed to be liquid codeine was also discovered.

Jackson was transported to Hopkins County Jail where he was charged with Possession of Marijuana between 5 and 50 pounds and Possession of a Controlled Substance between 28 grams and 200 grams.

Are You In Danger Of Catching The Coronavirus? 5 Questions Answered