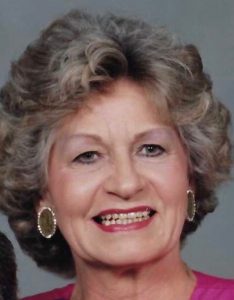 Memorial service for Wyvonne Bronson, age 85, of Sulphur Springs will be held at 1:30 P.M. on Friday, January 24, 2020 at First United Methodist Church with Jason Dietze and Rev. Ed Lantz officiating.  Interment will follow at Tira Cemetery. Visitation will be held from 12 to 1 P.M. in the Fellowship Hall at First United Methodist Church prior to the service. Mrs. Bronson passed away on Sunday, January 18, 2020 at her home in Sulphur Springs.

Wyvonne Eloise was born on January 18, 1935 in Austin, TX to Elias and Maybelle Owens.  She married Max Bronson on December 11, 1952 in Austin, TX. He preceded her in death in 2010.  Wyvonne was a homemaker and member of First United Methodist Church.

Wyvonne was preceded in death by her parents; husband; sister, LaTrell Dye.