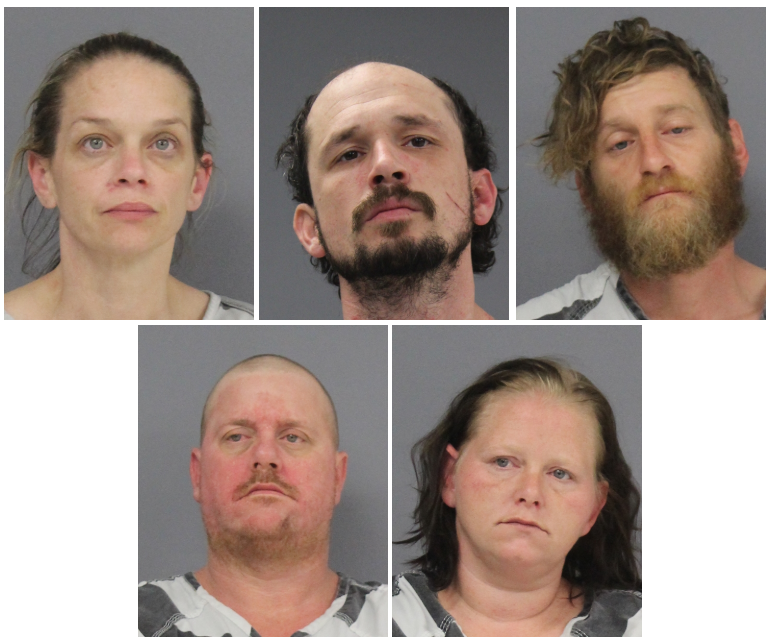 According to arrest reports, HCSO Investigators received information about weapons and a Suburban that were stolen in a recent burglary. Contact was made with Rusty Lee Clay, Shawna Clay, and Lonni Hammond Allen at a residence on County Road 2390.

Investigators and deputies were en route to another location when Stephen Joseph Bryant was located working on a vehicle on the side of the road. The stolen Suburban and a vehicle reported stolen out of Franklin County were located down the same road. Bryant admitted unauthorized use of both vehicles. He also admitted to taking multiple stolen weapons to the Clay residence that authorities had previously visited.

Authorities returned to the Clay residence where Rusty Clay and Stogner escorted HCSO Investigators into the woods where they had hidden eight stolen weapons under fallen timber, brush, and leaves.

All of the subjects were transported to Hopkins County Jail for interviews. All subjects admitted involvement with the burglary, concealment, possession, or sale of property taken during the burglary.

Ten stolen weapons, two stolen vehicles(one from Franklin County), and multiple tools were recovered during the investigation. A box containing methamphetamine, syringes, paraphernalia and scales was also located where it had been hidden in a culvert. Rusty Clay admitted that the box belonged to him and that he had hidden it.

Sheriff Tatum expressed his appreciation for these officers’ hard work and dedication to the cause of protecting our citizens and their property.