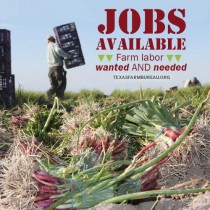 The economic headlines are encouraging. The U.S. economy is strong, and unemployment is below 4 percent nationally. Americans are working. But, unfortunately, many don’t want to work on America’s farms and ranches.

I was startled this week when I read a social post from a third-generation vegetable farmer in North Carolina. He described the critical shortage of domestic workers. They’re just not interested in those jobs.

And he said the increasing cost of foreign workers through programs such as H-2A has reached a point that he’s afraid that fruit and vegetable production in the U.S. will become unsustainable in the near future. That’s a serious statement.

All types of farms and ranches are facing labor shortages, but the problem is critical in the fruit and vegetable sector. This is where farmers are more dependent on hand-harvesting.

Every single one of the nation’s 10 most popular fruits—including apples, table grapes, strawberries and oranges—must be picked by hand. The same applies to seven of the top 10 vegetables we eat. Without human harvesters, the vegetable sections of supermarkets would offer only potatoes, carrots, leaf lettuce and salad mix. There would be no tomatoes, onions, head lettuce, bell peppers or cucumbers. And that’s just to name a few.

American agriculture is at a critical juncture. We need a solution to our labor shortage. In the short term, there needs to be a path to legalization for current workers who help sustain U.S. agriculture. In the long term, Congress needs to implement an effective, comprehensive guest worker program that is accessible to all of agriculture.

One fresh produce leader said it well. Do we want a system where we import workers or import our food? I believe the answer is clear.